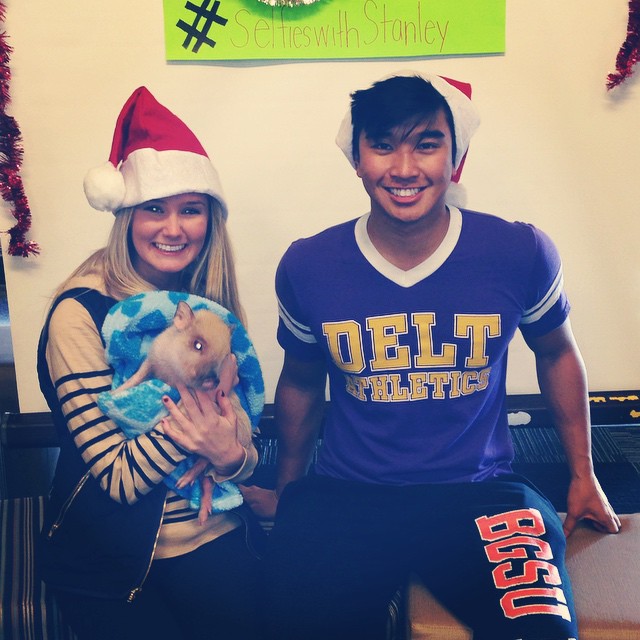 “He's blowing up on social media,” the Alumni Laureate Scholar said, laughing. “He's the cutest thing. People have been donating money to our service project to take a picture with him.”

Stanley lives in Hewitt's apartment as a registered service animal, she said. He's litter trained and has his own pen, which Hewitt constructed herself.

Stanley's habitat definitely won't be the last thing Hewitt builds. The BGSU junior is a construction management major who will be embarking on her third internship in the field this summer.

“My freshman year, I took a mission trip to the Appalachian Mountains with the campus church group H2O, and it was there that I started talking to another student who was a construction management major,” Hewitt said. “It started to sound really fascinating to me.

“I love the development and business side of construction, and coordinating between private managers and estimators. One huge goal for me would be to work in developing countries. I'm especially interested in going to Uganda. I've wanted to go there since I was about 12 years old.”

I love the development and business side of construction, and coordinating between private managers and estimators. One huge goal for me would be to work in developing countries. I'm especially interested in going to Uganda. I've wanted to go there since I was about 12 years old.

Hewitt was preparing to take her first trip to Uganda this summer, but it was canceled due to civil unrest that's recently transpired in that part of the world.

“I'll get there someday,” she promises.

It's little surprise that Hewitt dreams of global travel, considering that her father's role in the U.S. Air Force led to her being born in England. She also lived in Alabama, North Dakota and Michigan before her family settled in Holland, Ohio.

Living in northwest Ohio, Bowling Green State University was a name that loomed large when Hewitt was in high school and starting to think about college.

“BGSU was the only college campus I visited,” she said. “It felt homey and once I was accepted for the Alumni Laureate Scholarship, I was incredibly excited. I knew that without a scholarship, I was not going to be able to attend college, or if I did, it would have to be intermittently.”

While Hewitt won't be spending this summer in Uganda, she will be doing something she enjoys—interning at the corporate headquarters of commercial construction contractor Barton Malow in Southfield, Mich.

“BGSU has such a great construction management program and there are so many facets to the industry,” Hewitt said.

“BGSU has such a great construction management program and there are so many facets to the industry,” Hewitt said. “You can learn as much in 12 weeks on the job as you might in two years in a classroom, which is a big reason we're required to have three internships in this major.”

On top of interning every summer, Hewitt manages to be active in a variety of campus organizations.

For two years, she was a LifeGroup leader for H2O, coordinating community service projects to help homeless shelters and impoverished children. She has also volunteered her time and skills to organizations that provide home construction in poverty-stricken areas, such as Habitat for Humanity, Mountain TOP and Lincoln Campbell Work group. Hewitt has also served as vice president of the campus Student Construction Management Association.

Hewitt plans to graduate in December and said she's grateful she'll have the Alumni Laureate Scholar experience to look back on while searching for her first job, citing the benefit of attending events like the Academy of Distinguished Alumni awards banquet, hearing alumni success stories and getting to know alumni.

“I think we had some great opportunities to interact and network that many other students don't necessarily get to have,” she said.