A new full-figured lingerie brand now being stocked by national retailers is the venture of a BGSU alumnus of the Sidney A. Ribeau President's Leadership Academy (PLA).

Vontoba "Von" Terry '03 of Frisco, Texas, partnered with his wife, Psychelia, to found Urban Intimates, a trendy line of undies and unmentionables for curvy and plus-size women. Their designs in cup-sizes 32DD to 44H recently landed in select Macy's stores and the online store of J.C. Penney Co.

As a BGSU student, Vontoba earned a bachelor's degree in finance in order to prepare for a career in financial planning. He said he enjoyed his involvement in an early cohort of the PLA, a four-year leadership development program and full-tuition scholarship that includes unique courses, experiential learning opportunities, and one-on-one mentorship. The PLA program was recently featured as a model of best practices in the "Multi-Institutional Study of Leadership 2012 MSL Insight Report," written by the National Clearinghouse for Leadership Programs. 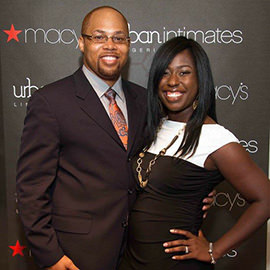 "He has always had a lot of goals, and not just one goal," said Ana Brown, former assistant director of the PLA. She is now coordinator for diversity and retention initiatives in the BGSU Office of Residence Life.

Vontoba remembers being academically challenged by Dr. Dan Klein, an associate professor of finance, and the courses in entrepreneurship that endure as "still useful for me now as an entrepreneur," he said.

"Vontoba, he was bright young man, so I'm not surprised by what he's been able to accomplish," Klein said.

Vontoba works full time as a corporate banking officer for Comerica Bank in the Greater Dallas area. His wife leads Urban Intimates as CEO and together they determine business strategy.

"Dr. Klein inspired me to look at different career options in finance and inspired me to get a master's degree""We make almost all decisions together, but I leave the day-to-day operations up to her," Vontoba said. Add their 2-year-old and 9-months-old sons to the mix, and you have one very busy family.

Both are educated in business administration, so naturally, the couple shared the goal to start a business and considered various entrepreneurial ideas. But the direction of their prospective business was unclear until his wife recognized that the selection of ready-to-wear lingerie diminished as her bra size increased after the birth of their first child.

"I think it was really that moment that the light bulb went off, that we should be loving on the curvy girls. That's what really took the business to the next level," Vontoba said. "I think Urban Intimates works because our customers know that a woman like them is designing for them and really cares about fitting their curves and helping them become more confident. We promote a message of being confident and edgy."

She a student at Western Michigan and he at BGSU, the two met as undergraduates after being selected for an exclusive symposium for minority students in business disciplines.

Their venture started taking shape after he and Psychelia moved across the nation to continue their educations at the University of Nevada Las Vegas. As graduate students, together they entered a competition that required a well-researched business plan as part of the MillerCoors Urban Entrepreneurs Series. Though they did not win with their idea for a niche skincare business, their market research became the foundation of their brand, Urban Intimates.

Even as Vontoba successfully built a career in banking, the couple continued to nurture Urban Intimates. They traveled to China to interview manufacturing partners, placed orders for samples and inventory, and created an online store for Urban Intimates.

"I definitely recommend reading about the business culture in China," Vontoba said of making international connections while building his supply chain. "But I would caution against (absorbing) all of the concrete information that's out there. It was different than we expected. The Chinese business people in the fashion and beauty industry were very laid back and dressed casually. I wore a suit, and no one else wore suits."

Next came some perfectly timed encouragement from a public relations representative of the MillerCoors brewing company who had been impressed by their plan. The rep urged the Terrys to apply for The Workshop at Macy's, a new program to cultivate minority- and women-owned startups to become vendors of the national retailer. Urban Intimates was selected for one of 22 spots out of 11,000 companies that applied for the first weeklong workshop of its kind held by Macy's in 2011.

Three years later, the brand continues to evolve: Vontoba and Pyschelia have since earned national retailer placement of a new skincare line at T.J. Maxx, Ross stores, Ulta, Target.com, the Army and Air Force Exchange, and a major grocery chain with locations in Texas and Mexico. They are now developing a cosmetic line.

Vontoba estimates that Urban Intimates has grown by 600 percent in just two years. He attributes that success to identifying the right international partners, maintaining an efficient supply chain, and their Christian faith.

"It is really exciting," he said. "What most companies can do in a year, we can do in three months. Part of that is the efficiency of figuring out who the right partners are, but we really believe there is a faith element. Trust and faith have given us an edge."