Hayley Milne rubbed elbows with some of the most notable country music stars during a co-op that was a dream come true.

She spent the summer in Nashville learning the ropes of the country music industry as an intern at both the Grand Ole Opry and Creative Nation.

The co-op became a reality for her as a result of advice she received before starting at BGSU. “Get involved,” she was told. She took the suggestion to heart by ravenously reading the daily Campus Updates as a freshman and attending as many events and activities as she could squeeze into her schedule.

After becoming involved in several organizations, it was a meeting with Dr. Jeff Kegolis that put her on a fast track to Nashville over a year ago. She had gone to meet with him in his role as assistant dean of students for fraternity and sorority life to work on plans to help make her sorority’s chapter stronger. She walked out of the meeting with his friend’s contact information in Nashville and a promise that he would email her.

Ready to shed her small town perspective and learn about the real world the Woodville, Ohio resident explained, “I emailed back and forth with a contact in Nashville, had a phone interview, and eventually things fell into place. I came to Nashville and immediately fell in love.”

She worked at Warner Music Nashville, one of “the big three” record companies last summer, and ended up staying last fall as well. She returned to BGSU in spring 2013, but stayed focused on learning more and gaining experience with a goal to return to Nashville.

She got her wish when she was offered the Grand Ole Opry internship this summer.

When she arrived in May, her first responsibilities involved preparing for the Country Music Association Festival, which attracts more than 300,000 people each year. 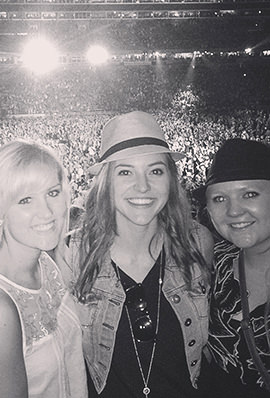 It was a whirlwind few weeks in preparation of the event and working at the fest. “I did everything but sleep,” she joked, from signage and publicity materials for the Opry events to filling 15,000 backpacks that were part of a fun promotion for the festival.

She was one of the team members at the festival who was taking photos and tweeting at people to wear the brilliant red Opry backpacks and rewarding them for their Opry loyalty.

“On the last day of the event, I was looking to give a reward to one of the many street cleaners who were up at the crack of dawn every day of the fest. While looking, I found a homeless military vet who had the little red backpack on his lap as he sat in his wheelchair. He was so proud to have the backpack and so happy to get the money,” she said, adding, “It was one of the best moments of the event for me.”

She had a hand in the Guitars of the Stars Auction, designing guitars for The Band Perry and Lauren Alaina to autograph for the Opry Trust Fund benefit. The Alaina guitar sold for $2,100, she reported proudly. Milne also created a personalized poster to commemorate Patty Loveless’ 25th anniversary with the Opry, designed lineup posters for many of the Opry shows and produced and scheduled 13 billboards throughout Nashville.

Her co-op was a little different than most, because she is a marketing major in the College of Business Administration. She registered for the co-op through the College of Technology, Architecture and Applied Engineering’s co-op program, which allowed her to use the experience to count toward her education credits.

Milne also took the initiative to intern at Creative Nation, an up and coming music publishing and management company in Nashville. As she sat in the front office of Creative Nation, she watched a wide array of musicians pass through. Her goal was to learn as much as possible the business side of the music industry during her two months with the company. She watched and asked questions about everything from scheduling and royalties to negotiations to licensing.

While she finishes up her degree this fall, she will be staying involved in the music industry by working remotely for Ready Set Management – helping them with promotions and social media, including the release of Trent Dabbs latest solo album and Young Summer’s album.

This summer’s experience “was personal for me,” Milne said. “I am career focused, and I am now on a path to doing something I am passionate about.”