Lake Vostok, buried under a glacier in Antarctica, is so dark, deep and cold that scientists had considered it a possible model for other planets, a place where nothing could live.

However, work by Dr. Scott Rogers, a Bowling Green State University professor of biological sciences, and his colleagues has revealed a surprising variety of life forms possibly living and reproducing in this most extreme of environments. A paper published July 2 in PLOS ONE (Public Library of Science) details the thousands of species they identified through DNA and RNA sequencing.

"The bounds on what is habitable and what is not are changing," Rogers said.

When thinking about Lake Vostok, you have to think big. The fourth-deepest lake on Earth, it is also the largest of the 400-some subglacial lakes known in Antarctica. The ice that has covered it for the past 15 million years is now more than two miles deep, creating tremendous pressure in the lake. Few nutrients are available. The lake lies far below sea level in a depression that formed 60 million years ago when the continental plates shifted and cracked. The weather there is so harsh and unpredictable that scientists visiting must have special gear and take survival training. 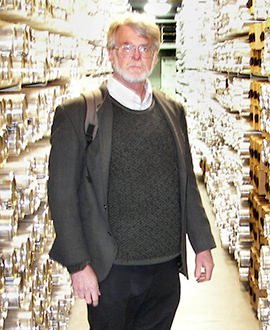 Scott Rogers during a visit to the U.S. Geological Survey's National Ice Core Laboratory in Colorado, where most of the ice cores are stored in the U.S. Each of the canisters contains about 1 meter of ice from ice cores primarily in Antarctica and Greenland. The warehouse is held at -36C (-33F), and adjoins a workroom, which is at -20C (-4F).

Not only had most scientists believed Lake Vostok completely inhospitable to life, some thought it might even be sterile.

Far from it, Rogers found. Working with core sections removed from the deep layer of ice that accreted from lake water that froze onto the bottom of the glacier where it meets the lake, Rogers examined ice as clear as diamonds that formed in the great pressure and relatively warm temperatures found at that depth. The team examined cores from two areas of the lake, the southern main basin and near an embayment on the southwestern end of the lake.

"We found much more complexity than anyone thought," Rogers said. "It really shows the tenacity of life, and how organisms can survive in places where a couple dozen years ago we thought nothing could survive."

"It really shows the tenacity of life, and how organisms can survive in places where a couple dozen years ago we thought nothing could survive."This is the fourth article the group has published about its Lake Vostok investigations. The team included Dr. Paul Morris, biology, who with Scott and doctoral student Yury Shtarkman conducted most of the genetic analyses; former doctoral students Dr. Zeynep Koçer, now with the Department of Infectious Diseases, Division of Virology, at St. Jude Children's Research Hospital in Memphis, performed most of the laboratory work; Dr. Ram Veerapaneni, now at BGSU Firelands, Dr. Tom D'Elia, now at Indian River State College in Florida, and undergraduate student Robyn Edgar, computer science.

Their work was supported by several grants, including two from the National Science Foundation, one from U.S. Department of Agriculture and one from the BGSU Faculty Research Committee. Together, the amount dedicated to the project was more than $250,000.

By sequencing the DNA and RNA from the accretion ice samples, the team identified thousands of bacteria, including some that are commonly found in the digestive systems of fish, crustaceans and annelid worms, in addition to fungi and two species of archaea, or single-celled organisms that tend to live in extreme environments. Other species they identified are associated with habitats of lake or ocean sediments. Psychrophiles, or organisms that live in extreme cold, were found, along with heat-loving thermophiles, which suggests the presence of hydrothermal vents deep in the lake. Rogers said the presence of marine and freshwater species supports the hypothesis that the lake once was connected to the ocean, and that the freshwater was deposited in the lake by the overriding glacier.

The largest number of species overall was found in the area near the embayment, including many that are common to freshwater environments, as well as marine species, psychrophiles and thermophiles. Numerous others were found that remain unidentified. The embayment appears to contain much of the biological activity in the lake.

"Many of the species we sequenced are what we would expect to find in a lake," Rogers said. "Most of the organisms appear to be aquatic (freshwater), and many are species that usually live in ocean or lake sediments."

For Shtarkman, who came to BGSU from St. Petersburg, Russia, the project has proven so engrossing that he foresees a possible lifetime of study around it.

"It's a very challenging project and the more you study, the more you want to know," he said. "Every day you are discovering something new and that leads to more questions to be answered. In studying the environmental DNA and RNA, we ask how similar are these sequences to those of sequences from organisms already identified in national databases. We are tracing the evolution and the ecology of the lake itself."

As the ice crept across the lake, it plunged it into total darkness and isolated it from the atmosphere, and led to increasing pressure in the lake from the weight of the glacier. While many species probably disappeared from the lake, many seem to have survived, as indicated by Rogers' results.

Rogers's group had worked for several years on identifying and studying organisms in the Vostok accretion ice using a procedure involving culturing colonies of bacteria and fungi, but the process was slow, especially for graduate students who needed results for their theses, and sometimes impossible due to the technical limitations involved, Koçer noted.

"We started thinking of doing it a different way," Rogers said.

Instead of culturing living organisms, they concentrated on sequencing DNA and RNA in the ice. These methods, called metagenomics and metatranscriptomics, produced thousands of sequences at a time that were then analyzed using computers - procedures referred to collectively as "Big Data" methods. In contrast, it usually took years to generate enough cultured organisms for a few dozen sequences.

"...we knew we were so close to opening the doors to a hidden habitat of the world."The problem changed from having too few sequences to having too many sequences to analyze, Rogers said. After two years of computer analysis, the final results showed that Lake Vostok contains a diverse set of microbes, as well as some multicellular organisms.

"We were working with very precious samples," said Koçer, who came to BGSU from Turkey. "It's not like taking ice from Lake Erie, where you can gather buckets full to filter and concentrate. We had the most tiny concentrations of nucleic acids to work with, and it helped that Dr. Rogers had so much experience in this area. It's still a long and difficult process, but for what you get from it, it's worth it.

"It was the most exciting moment for me when Dr. Rogers and I were finally able to visualize the nucleic acid from the Lake Vostok ice on the agarose gel, and at that point, we knew we were so close to opening the doors to a hidden habitat of the world."

Long before he began using metagenomics and metatranscriptomics to study the ice, Rogers and his team had developed a method to ensure purity. Sections of core ice were immersed in a sodium hypochlorite (bleach) solution, then rinsed three times with sterile water, removing an outer layer. Under strict sterile conditions, the remaining core ice was then melted, filtered and refrozen.

"Using this method, we can assure its reliability almost to 100 percent," Rogers said.

Eventually, the process rendered pellets of nucleic acids containing both DNA and RNA, able to be sequenced.

Rogers said the team erred strongly on the conservative side in reporting its results, including only those sequences of which it could be absolutely certain were from the accretion ice, but there are a multitude of others he feels are probably from the lake, opening the door to additional investigation.

The DNA sequences they produced have been deposited in the National Center for Biotechnology GenBank database, and will be available to other researchers for further study.