First-year students face a long list of life-altering adjustments during the transition from high school to college life. In the case of BGSU's 425 student-athletes, that list of demands and sacrifices can be particularly challenging as academic responsibilities are balanced with the rigors of intercollegiate athletic competition.

Now add the process of acclimating to myriad cultural differences as an international student, and you begin to understand the real-life crucible that freshman swimming sensation Daniela Carrillo conquered in her inaugural year as a Falcon.

Carrillo, who hails from Hermosillo, Mexico, posted a record-setting season while contributing to her team's third-place finish in the Mid American Conference Championship. Her second-place finishes in the 100-meter and 200-meter breaststroke at the conference meet also set new school records in both events.

That alone would have stood as a triumphant culmination to Carrillo's opening season in which she posted a total of 11 top-two finishes in the 100 and 200 breaststroke, including five wins. But she didn't stop there. Carrillo was also named to the All-Mid-American Conference Second Team and became the first Falcon swimmer to advance to the NCAA Championships since 1996.

"Competing in the NCAA Championships was probably the biggest highlight of my season," said Carrillo. "But that couldn't have happened if I hadn't changed my stroke and my entire approach to swimming." 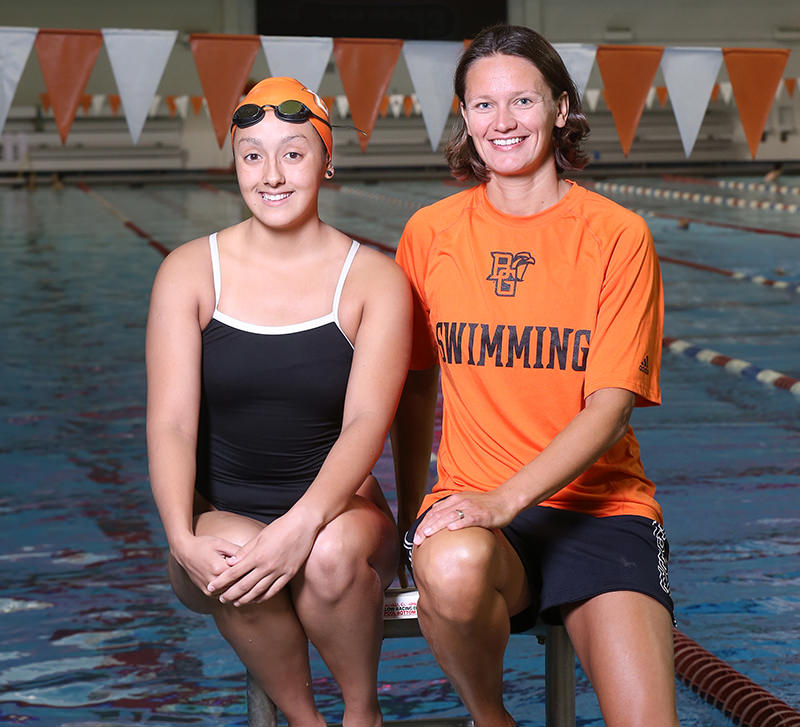 Falcon swimming sensation Daniela Carrillo poses with head coach Petra Martin, who was named the Mid-American Conference Coach of the Year for swimming.

Carrillo attributes this evolution of fundamentals to the work ethic instilled by head coach Petra Martin and to the shared dedication of her team.

"Coach really pushed me hard and so did my teammates," said Carrillo. "I've never worked so hard in my life, but the results have been worth all the effort."

The elite swimmer pointed to a new training regimen that was not only harder, but also different.

"Our workouts are more dynamic, with the whole team working together and supporting each other." That proved decisive not only for Carrillo but for BGSU's swimming team, which moved from No. 8 in the conference in 2011-12 to No. 3 last season.

Team dynamic is foundation for excellence

"Last year was my third season with BGSU and it has been a building process," noted Martin, who was named the Mid-American Conference Coach of the Year for swimming. "Our success this year was all about coming together as a team, but just as important as this cohesion was each team member stepping up to take personal responsibility for her own performance and the good of the team."

Carrillo and her fellow Falcon swimmers stepped up in a big way, resulting in a memorable season that's one for the record books. The Falcons' finish was the highest since 2004 and only the third top-three MAC finish since 1993. Martin's squad broke 16 BGSU records, totaling 467 points to trail only Ohio (505) and champion Miami (621) in the MAC standings.

"Every great athlete needs to have somebody 'keeping him or her honest,'" noted Martin, who went about laying the groundwork so that the team was constantly helping one another to keep achieving more. "We have a group of athletes who want to do well and they are willing to go the extra mile and to push each other to the next level."

In addition to this high performing team dynamic, getting into the zone for competitive success in the pool also depends on success in the classroom. Academic issues can throw the individual's whole cycle off, affecting every aspect of life including her ability to contribute to the team according to Martin.

For Carrillo, this was one of her biggest challenges as a first-year student-athlete.

"Adjusting to a different culture wasn't so much about the language but more about having to step up my study habits," Carrillo said. "That's why I took full advantage of all the resources available through Student-Athlete Services and at the Learning Commons."

"Academics are absolutely No. 1 for us," noted Martin. This reflects a viewpoint and a mission shared by every coach across BGSU's 18 intercollegiate sports teams. "We pay a lot of attention to how our student-athletes balance academics and athletic competition."

There is ample proof of this commitment as swimming is one of three sports at BGSU to have the highest Academic Progress Rate (APR) score in the MAC according to a recent report from the NCAA. APR is a real-time measure of eligibility, retention and graduation of student-athletes competing on every NCAA Division I athletics team.

Martin went on to point out that the team's spring GPA came in at 3.42 and the goal for each student-athlete is to maintain at least a 3.0. This high performance was no accident.

"Our swimmers have huge demands on their time and we need to figure out quickly if anybody is struggling on the academic side," said Martin.

It truly "takes a village" - an interdisciplinary village of BGSU experts - to meet the unique needs of Falcon student-athletes like Carrillo and her teammates. The University's innovative Sport Performance Program provides an all-important resource that leverages broad expertise across campus in sports medicine, strength and conditioning, nutrition, body composition and sports psychology.

When added to what Student-Athlete Services provides on the academic side, Sport Performance is an integral part of what Martin called "abundant support," backing up every Falcon coach and student-athlete. It all added up to a game-changer for Carrillo.

"Casey met with me every week," said Carrillo, referring to Interim Assistant Director of Student-Athlete Services Casey Stark. "She helped me a lot with my study skills. Carrillo also mentioned BGSU doctoral student Mallory Mann for her invaluable help throughout the year in the area of sports psychology. They represent a broader trend the international student-athlete has experienced as a Falcon. "It's been amazing how polite and helpful everybody has been," she said. "The faculty and other staff members always go above and beyond their jobs to help, and that's made a huge difference."

Carrillo will represent Mexico in the 50-,100- and 200-meter breaststroke at the Summer Universiade - often referred to in English as the World University Games - in Kazan, Russia, beginning July 6. Taking place every two years, the Universiade is an international multisport event organized for university athletes by the International Sports Federation. It is the second largest multisport event in the world, representing the experience most akin to an Olympics in terms of scale, village life and competitive standards. This year, more than 9,000 student-athletes and officials from over 170 countries will compete and officiate in 10 compulsory sports with 13 compulsory disciplines and up to three optional sports.

It is just Carrillo's latest challenge in a collegiate career that has taken off during her first year at BGSU. It is also a well-deserved reward for her dedication and success, marking her highest level of competition to date.

After that, the champion swimmer will enjoy some relaxation with her family before coming back to prepare for next season. Carrillo's goals include improving her technique in the water and building her overall strength. She hopes to contribute to the team's success during the regular season and compete again in the NCAA Championships, along with the Mexican National Championships and other international competitions. In addition to her competitive goals, Carrillo plans to stay focused on her studies, maintaining a 3.0 GPA or better while also deciding on a new major.

The future is indeed bright for Carrillo and her teammates as they continue to build a team dynamic and winning tradition within a truly world-class support structure at BGSU.