From football star to music man 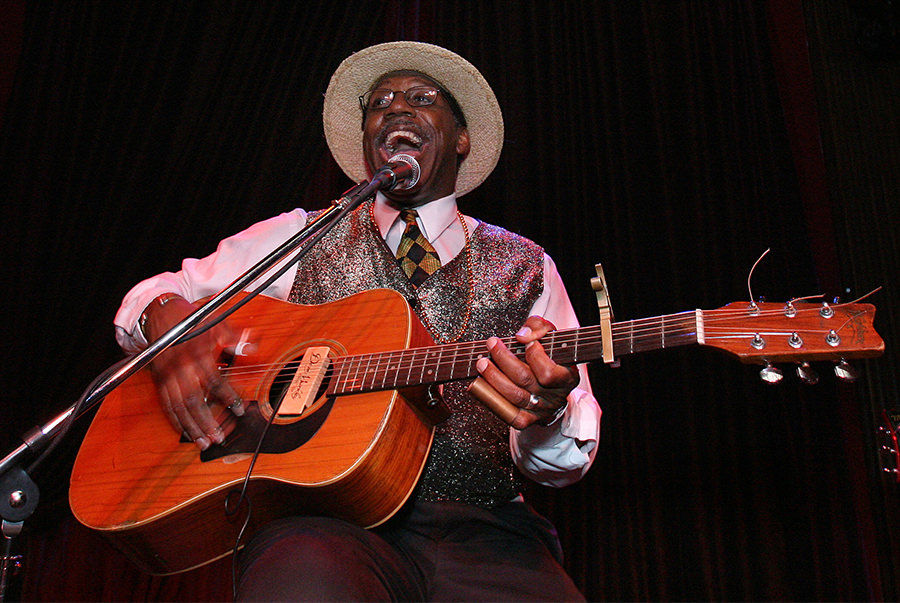 Before running to gigs as Detroit's "blues man," Paul Miles ’74 was running down field for the Falcons.

The performer recently reflected on his award-winning music career, and how it accidentally started at Bowling Green State University.

He was a first team All-MAC selection as a tailback in 1971, 1972 and 1973. At the time, Miles was only the third running back to rush 1,000 yards in three seasons in the history of the NCAA. He boasts the second-most career rushes in University history, with 3,238 yards. Miles remains the only Falcon football player to have his number retired: Falcon number 29.

Between games and practices, he was playing his six-string. He taught himself to strum between classes and football practices on his dad's guitar, one his father had been given by a coworker at General Motors in Defiance, Ohio. Miles, a Paulding, Ohio, native, sang lead in a rock cover band in high school but didn't master an instrument until college.

Before long, Miles was playing in the former basement lounge of Kohl residence hall and at gigs around town. He was hired by student activities coordinator Richard Lenhart to play at the student union. Off campus, when he sang with rock cover band, Bad Dog, some students would recognize him as "that one guy playing football," Miles recalled.

As he earned his bachelor's degree in sociology, with a minor in philosophy, he found both subjects coloring aspects of his music. He credits English faculty member Dr. Sheldon Halpern and his poetry class for improving his songwriting, but Halpern also encouraged his performing. As a student, Miles said he was invited to entertain at a special father-daughter dinner held at Halpern's local temple.

But back then, football seemed to be his future. When the NFL went on strike as Miles graduated in 1974, a new promising league was forming. As the World Football League lured many established players away from its more famous competitor, Miles was drafted to join the league's Toronto Northmen, which became the Memphis Southmen. He kept his guitar close, sometimes playing for his teammates on the road, and performing in local restaurants in the off season.

However, financial troubles loomed as Paul and his team became league champions. The World Football League went bankrupt in 1975, news he heard only after moving to California for another team in the league.

"That's when my life changed. My car was repossessed, and I moved to a place far inferior to what I was used to," he said. "I played football, then football went away."

But he found creative ways to pay the bills, and music offered many new opportunities. He started busking on the beach, and those free performances led to paid gigs and other performance opportunities. A new job as an overnight phone counselor through a drug and alcohol treatment program allowed him to explore new performance and acting opportunities during the day.

"Allow yourself to be open to the alternative ways that we are able to learn and grow."In 1980, he was the featured actor during a McDonald's fast food commercial shown during the "Who shot JR?" finale, the highest-rated episode of the primetime soap opera "Dallas." And by 1991, his San Diego jazz group, Paul Miles Express, was in steady demand.

At his busiest, he was splitting his time between working as a drug and mental health counselor, dabbling in children's theater, and raising a child as a single parent.

It was too much.

"I had to get serious about my art," he said. "There's a thing called burnout."

In 1995, he committed to music full time. After years of borrowing from various genres, he found the best one yet: the blues.

Miles stays busy playing regular shows in the greater Detroit area, travels often to perform in Scottsdale, Arizona, and makes his way around the club circuit when he visits family in Switzerland.

"I feel very blessed that my music has taken me to all of these various places," he said.

He remains connected to BGSU, even writing a song for the football team before the 2012 Military Bowl. Watch it: http://goo.gl/gEhSP.

His advice for students: Be open to all those you meet. Life lessons are often disguised.

"Be flexible, have an open mind and know that education can come from more than just your textbook," Miles said. "Allow yourself to be open to the alternative ways that we are able to learn and grow."