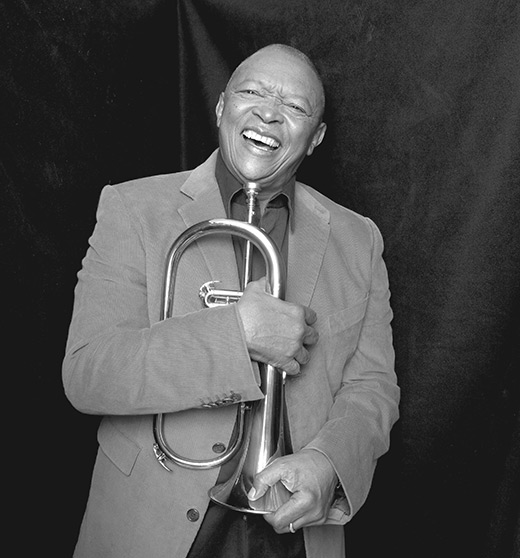 An innovator in the world music and jazz scene, Masekela is best known for his 1968 Grammy-nominated hit single, “Grazing in the Grass,” which sold over four million copies. He played an integral role in Paul Simon’s tour for “Graceland,” which was one of the first pop records to introduce African music to a broader public.

Masekela has collaborated with numerous artists in the United States, Africa and Europe, including Miriam Makeba, Dizzy Gillespie, Harry Belafonte, Herb Alpert, Fela Kuti (in Nigeria) and Franco (in the Congo). Renowned choreographer Alvin Ailey chose a piece by Masekela to create a work for his Alvin Ailey American Dance Theater. Masekela also co-created the Broadway smash musical “Sarafina” that introduced the sounds and passion of South African music to theater audiences worldwide.

He was recently nominated for a 2012 Grammy Award in the “Best World Music Album” category for the album “Jabulani,” produced and arranged by Don Laka and released through the Gallo Record Company label in South Africa and Razor and Tie Records in the U.S.

Masekela’s music portrays the struggles and joys of living in South Africa and voices protest against slavery and discrimination. His work as an activist raised international awareness of the South African government’s restrictive apartheid policies. In the 1980s his hit song “Bring Him Back Home” became an anthem for the Free Nelson Mandela movement.

In the 1990s Masekela himself finally returned to South Africa and renewed the musical ties to his homeland. In 2004 he released his autobiography, “Still Grazing: The Musical Journey of Hugh Masekela,” a stunning memoir that is both heartbreaking and hilarious.

Maskela is joined by Abednigo Sibongiseni Zulu, bass guitar; Frances Manneh Edward Fuster, percussion and backing vocals; Randal Skippers, keyboards and backing vocals, and Lee-Roy Sauls, drums and backing vocals. The BGSU performance is the first on an 18-city tour in support of his new recording, “Playing@Work.” To purchase tickets online, visit http://bgsu.edu/arts. Tickets can also be purchased by calling 419-372-8171.