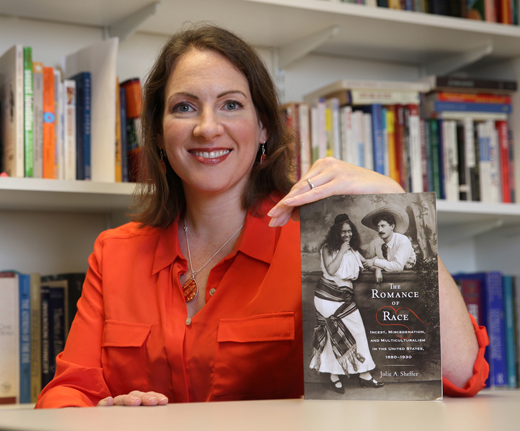 BOWLING GREEN, O.—A new book by Dr. Jolie Sheffer is further confirmation that one should never doubt the power of the pen. “The Romance of Race: Incest, Miscegenation, and Multiculturalism in the United States, 1890-1930,” published in January by Rutgers University Press, explains the role of minority women writers and reformers in the creation of modern American multiculturalism.

Like their male counterparts Charles Dickens and Victor Hugo in Europe, these authors provided their largely middle-class, female readers an intimate and sympathetic look at people with whose lives they were otherwise unfamiliar. Through stories of romances between white men and minority women told in human terms, authors such as María Cristina Mena, Mourning Dove, Onoto Watanna and Pauline Hopkins created a vision of the United States as a mixed-race, even incestuous nation, says Sheffer, an assistant professor of English and American culture studies at Bowling Green State University.

It’s well known that the abolitionist movement gained hugely in support thanks to Harriet Beecher Stowe’s portrayal of the horrors of slavery in “Uncle Tom’s Cabin.” Readers of African-American anti-slavery novels also became aware of the consequences of people being treated and sold as property and the possibility of unintentional incest that could result from families being split up and men denied their roles as fathers. At the turn of the century, some women writers adapted those plots to talk about the nation’s changing demographics, Sheffer said.

The formation of national identity underwent a revolution between 1880 and1930 with the huge wave of immigration that took place, the expansion of legislated racial segregation and the United States’ increasing imperialism and consequent dehumanization of nonwhite races, Sheffer points out. Counter to that, the books by minority women writers (and some sympathetic white reformers) celebrated the “melting pot” of American life, where people of different races and backgrounds fell in love, married, had children — a view that reframed political debates in more intimate terms and represented the nation as a diverse family, according to Sheffer.

“Although they are largely forgotten today, except for a few like Mourning Dove, these ethnic women writers were hugely popular in their day,” Sheffer said. “Their books were best-sellers, but as melodramas, romances and Gothic tales they didn’t fit into the literary canon as precursors to modernism the way that books by people like Henry James and Edith Wharton did. I wanted to see if there was something in those books that might have been radical in the past and that might still be of value today.”

Some of the writers, whatever their political beliefs, capitalized on the popularity of the genre and wrote what would sell. Under the faux-Japanese nom de plume Onoto Watanna, Winifred Eaton, herself English-Chinese, wrote about Japanese women in relationships with white American men, but later turned to stories about Canadian heroines. Others’ names remain well familiar today, including Jane Addams — suffragist, sociologist and pioneer of settlement houses for the poor.

The topic was a natural for Sheffer not only because of her interest in literature and American culture studies but from a personal viewpoint as well, she says. Her grandparents embodied the unlikely union of immigrants from disparate backgrounds — one from Germany and another an Eastern European Jew. “Only in America,” she said.