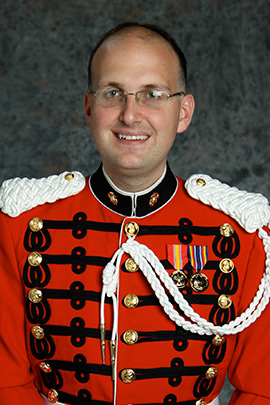 For many, the opportunity to live their life's dream takes a backseat to life's realities, but not so for Ryan Nowlin, BGSU alumnus and staff arranger for the“President's Own” United States Marine Band. However, daring to believe he could live his dream propelled Nowlin last month into a spotlight he could never have predicted, when he had the“amazing and humbling” opportunity to participate in the Inauguration of President Obama, including arranging pieces for Kelly Clarkson and Beyoncé.

Inspired by his pride and love of country, Nowlin sought to create a “lush, orchestral sort of sound' as he arranged the pieces for the pop stars. According to Nowlin, both Clarkson and Beyoncé wanted to perform with the Marine Band, and each had a vision of her arrangement. Nowlin had just two weeks to arrange the pieces and send the demos on to their music directors. In his first experience with major celebrities, he says, “Everyone was fantastic. Both Ms. Clarkson and Beyonce’ asked for a copy of the vocal sheet music to frame for their studios. I was particularly touched by that.”

“Ms. Clarkson had a very evocative take on ‘Tis of Thee’ and how she wanted it to go,”said Nowlin. “We were able to capture her smokey-bluesy quality but still stay true to the song. Beyoncé wanted a presidential and reverential arrangement—one that would have strong emotional pull. It was a true collaboration between us all, and I was given the freedom to make both pieces original and fit the occasion.”

Beginning his musical instruction at age 5 on the piano, moving on to trumpet by age 10 and French horn by 17, Nowlin always knew his future would revolve around music, but not necessarily to the heights he has achieved with the Marine Band.

“I've always looked up to, listened to, and was constantly inspired by the Marine Band. I can't say that I ever imagined being a part of it—seemed out of my reach—and my sights and dreams were always on being a music teacher and running a band program … or being John Williams!”

Reflecting on the opportunity to participate in the Inauguration, Nowlin said,“I found the experience deeply, deeply moving and surreal. To be a part of such an historic event, and to be a part of music that communicates my very personal emotions about our country was simply an experience I will never forget. I was very moved by the way the artists treated the music, and incredibly humbled by the response of the hundreds of thousands of Americans on the National Mall.”

Nowlin earned both a bachelor's degree in music and a master's degree in music education from BGSU, studying with Herbert Spencer and Bruce Moss. Over the years he has worked as staff arranger for the Bowling Green State University Marching Band, band director at Jackson City Schools, and director of bands for the Brecksville-Broadway Heights School District before joining The Marine Band in 2010.

“It's true that I am living my dream, but my dream, like many's, is finding a place where any gifts I have been given can do the most good for the most people. Could I have predicted where I would be today? No—and that's the beauty of it. I had this dream and through grace, it has led me to where I am today.”