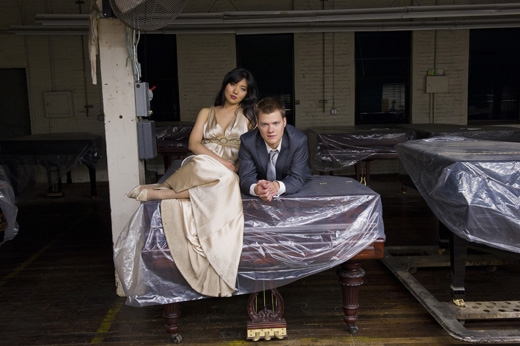 Known for their adrenalized performances, inventive programming, original compositions and refined artistry, Anderson and Roe have been described as "Fred Astaire and Ginger Rogers transposed from the dance floor to the keyboard" (Southampton Press). They bring a fresh and visionary approach to the concert stage, impressing audiences around the world as a four-hand and two-piano team.

The BGSU program will feature Mozart’s “Sonata for Two Pianos in D major” and “Part 1: The Adoration of the Earth” from the Stravinsky’s “Rite of Spring.” Special arrangements by Anderson and Roe of Rachmaninoff’s “Vocalise, Op. 34, No. 14,” Piazzolla’s “Libertango,” Radiohead and even Michael Jackson’s “Billie Jean” fill out the concert.

The two Steinway Artists reached popularity through their interactive website, http://www.andersonroe.net, which has generated great enthusiasm among fans and Internet bloggers. The duo responds regularly to user questions and comments, and their wildly creative, self-produced music videos have been viewed millions of times on YouTube alone.

Their debut album, "Reimagine," was released in 2008, and their second album, "When Words Fade" was released in 2012 to high acclaim, rising quickly to the top of Billboard's chart. In the 2012-13 season the duo makes its first Asian tour, performing in China, Korea, Taiwan and Singapore as well as with several American symphony orchestras.

Anderson and Roe’s Bowling Green visit will also include a master class for BGSU piano students, and the duo will be judges for the final round of the David D. Dubois Piano Competition for high school students. The final round of the competition is free and open to the public and will be held from 9 a.m. to noon on Feb. 10 in Kobacker Hall.

To purchase tickets online for the performance, visit http://www.bgsu.edu/arts.