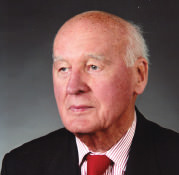 Otto Schoeppler '47, '79 (Hon.) was recently appointed a "Chevalier" of the Legion of Honor by decree of the president of France during the Sarkozy administration. The Legion of Honor, or Légion d'honneur, is France's highest order, or decoration, that recognizes military and civilians alike for their bravery or honorable service to the country.

In a letter from the French Ambassador to the United States, Schoeppler is praised for his merits and accomplishments. The letter states, "This testifies to President Sarkozy's high esteem for your merits and accomplishments. In particular, it is a sign of France's infinite gratitude and appreciation for your personal and precious contribution to the United States' decisive role in the liberation of our country during World War II."

The Legion of Honor was created by Napoleon Bonaparte in 1802 to acknowledge services rendered to France by persons of great merit.

Schoeppler's studies were interrupted at BGSU by nearly three years of military service. During World War II he served as a lieutenant in the U.S. Army in Europe, and was awarded the Bronze Star, Purple Heart and the Croix de Guerre.

"Following my discharge from the U.S. Army, I remember returning to campus to see my then-sweetheart Eva Marie Saint at the DG House," he said. "I also have positive memories of President Frank Prout because he empathized with the students for their problems as well as their achievements."