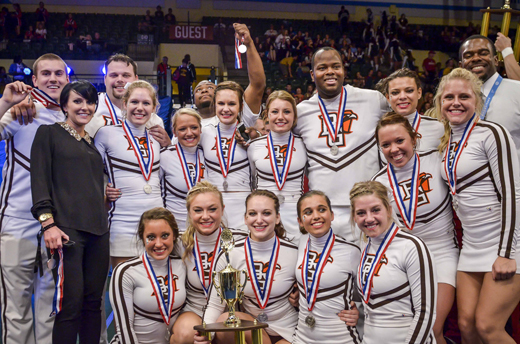 BOWLING GREEN, O.—The Bowling Green State University cheerleading team made history Jan. 19 during the 2013 Universal Cheerleading Association (UCA) College Cheerleading National Championship at the ESPN Wide World of Sports Complex in Orlando, Fla. The team finished second in the nation, which is the highest a Mid-American Conference school has ever placed.

This is the fourth consecutive year the BGSU squad has placed in the top five in the country. The Falcons were just 0.7 points out of first and will receive an automatic bid to the 2014 UCA National Championships.

"Having the success that we did at nationals was the icing on top of an amazing cheerleading career,” said Tyler Strom, a senior majoring in sport management from Charlotte, N.C. “This team was unlike any other team I have ever been a part of — we pushed through adversity and completed our team goal. We could not have done it without the support from our coaches, family and alumni.”

BGSU was also one of 10 teams from the United States to represent the country in the World University Championship on Jan. 20. Bowling Green took first place in the Small Co-ed Division I category. Seven other countries were represented, including Canada, England, Japan, Costa Rica, Germany and Mexico. The team will have the opportunity to travel internationally to represent Team USA this fall.

"This being my senior year, doing well at nationals meant the world to me, and we fully exceeded my expectations,” said Taylor Tanner, a sport management major from Marion, Ohio. “I couldn't have asked for anything more from my team. Every person on the floor worked hard to get there and continued to work up until the last second of the last routine that we performed.”

"We are proud of the BG cheer team and how they represented the University on a national and international level this weekend,” said Head Coach Anne Marie King. “Competing against top programs across the country is an opportunity they embraced with dedication and pride, and their hard work as a program over the past year paid off. ”

Both the UCA College Cheerleading Nationals and the World University Championships will air on ESPN in April.