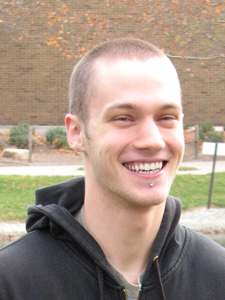 A student of Dr. Roger Schupp, a professor of performance studies, Klunk, from Toledo (2044 Robinwood Ave.), was selected as one of four finalists from an international pool to compete for a $5,000 cash prize.

Judged by a panel of internationally renowned percussionists, the four performers will be evaluated on their ability to display the highest level of artistic expression in percussion performance.

In his four years at BGSU, Klunk has performed in numerous ensembles, including the Concert Band, the Wind Symphony and the Bowling Green Philharmonia. He was one of last year’s winners of the undergraduate division in the college’s Competitions in Music Performance and was a member of the Boston Three Party, a percussion trio that took second place in the 2009 Bowling Green Chamber Music Competition. He is also a recipient of a 2008 Bernice Ely Coulon Special Achievement Award.

The International Solo Competition will be one of 150 events performed on 12 stages during the four days of the convention. Some of the world’s most impressive performers on drum set, orchestral percussion, keyboard, world percussion and marching band percussion will be featured.

As the world’s largest percussion organization, the Percussive Arts Society is considered the central source for information and networking for percussionists. An organization concerned with promoting percussion education, research, performance and appreciation worldwide, the society boasts over 8,500 members from all levels of percussive proficiency.