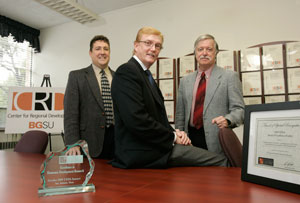 Celebrating their win for economic development research are (left to right) William Burns, Michael Carroll and Joseph Frizado.BOWLING GREEN, O.—As the use of wind turbines to generate electrical power has increased, so has the demand for the turbines. A collaborative group of Bowling Green State University and University of Toledo researchers was recognized recently for taking a fresh approach to determining the most promising sites in Ohio for production of the giant windmills. Their method could potentially be replicated for other industries as well.

“Locating Aspirational Clusters: A Spatial Method for Locating Ohio’s Wind Energy Cluster” was developed by Dr. Joseph Frizado, interim dean of the College of Technology and a professor of geology; Dr. Michael Carroll, director of BGSU’s Center for Regional Development (CRD) and an associate professor of economics; William Burns, assistant director of the CRD; Dr. Bruce Smith, Professor Emeritus of geography, and Dr. Neil Reid of the University of Toledo, a geographer specializing in economic planning.

“The federal government has identified Ohio as the number two state for pre-existing industrial support for building wind turbines, largely because we have so many factories related to the auto industry,” Frizado said. “Most of the manufacturing of wind turbines is done in Europe. The question is how to attract Ohio companies to build them, and where.”

“With the contraction of the automotive industry, we looked for a way to transition our assets as a manufacturing state. A lot of the parts are similar,” Burns said. Given the current economic situation, he added, “it’s going to become more important from an innovation standpoint to find other ways we can boost development. A lot of the ideas come from the laboratories and research centers in universities.”

“We used a type of modeling used in the physical sciences and adapted it to the supply chain side,” Frizado said. “Putting the pieces together is a focus of the School of Earth, Environment and Society.”

He and his colleagues identified 13 major components needed to produce a wind turbine and then looked for possible producers in Ohio.

“Our survey of the state revealed 1,300 possible firms, based on their industrial classification, that could have the necessary skill set to build components,” Burns said.

The team made 13 maps, one each for the respective components, then overlaid them to see where the major clusters of the required industries lay. “We looked at finding the optimal locations,” Frizado said.

The most important, and also most costly, ingredients in a wind turbine are iron and steel for the towers and blades, Frizado said, adding that iron foundries tend to be in the center of the state and on the southern border. “This method allows you to play ‘What if?’. If, for example, you had 12 of the industries in an area, could you attract a ball-bearing plant?”

Using the contacts included in the report, companies could explore the possibilities, and interested regions might approach companies about transitioning their manufacturing product, Burns said.

The team wants to pursue its findings further with the Ohio Department of Development, and possibly expand the work into solar energy and photovoltaics. “There’s the potential for a good supply chain,” Frizado said.

In addition to its economic development research award, the CRD was notified last week of a further honor: it has been selected by the U.S. Department of Commerce as its University center of the month. The center and an interview with Carroll will be featured in an article posted on the Economic Development Administration’s national Web page. The CRD was nominated by the Chicago regional office.

Editor’s Note: To speak with any of the participants in the wind turbine study, call Bonnie Blankinship, Marketing and Communications, at 419-372-2618.