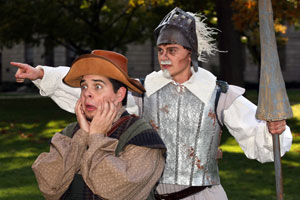 Don Quixote (Matthew Hayner, a senior vocal performance major from Lockport, N.Y.) directs his bumbling sidekick, Sancho Panza (Joel Trisel, a senior music education major from Celina).BOWLING GREEN, O.—Fans of the beloved character Don Quixote, the “Man of La Mancha,” are in for a double treat at Bowling Green State University next week. “An Evening of Two Operas Inspired by Cervantes’ ‘Don Quixote’” will be presented at 8 p.m. Friday (Nov. 6) and at 3 p.m. Sunday (Nov. 8) in Kobacker Hall of the Moore Musical Arts Center.

The opera will be sung in Spanish and performed by members of Madcap. It portrays a puppet opera within a puppet opera. Large puppets are used for the “real-world” characters Don Quixote, Trujamán and Maese Pedro, and small puppets will be used to perform the show that Quixote is watching.

Founded in 1981 by the late Jerry Handorf, Madcap Productions Puppet Theatre is a national touring company that creates high-quality, live puppet entertainment focusing on children’s literature and world cultures. Through the years, Madcap has expanded its repertoire to include special performances that feature giant puppets along with symphony orchestras, museums, opera and ballet to bring a richly textured artistic experience to children and their families. Bradford Clark, a BGSU professor of theatre and film, is the set and puppet designer.

“Don Quichotte auf der Hochzeit des Comacho,” composed by Georg Philipp Telemann, will be sung in English. The comic opera tells the story of the rural wedding of the wealthy Comacho and Quiteria, the beautiful woman marrying him for money, not love. Don Quixote, present during the ceremony, is expected to restore order to the festivities after Basilio, a poor shepherd hopelessly in love with Quiteria, stirs up trouble at the event.
Matthew Hayner, a senior vocal performance major from Lockport, N.Y. (6260 Rock Ridge), will perform the role of Don Quixote, and Joel Trisel, a senior music education major from Celina (1103 Grand Ave.), will appear in the role of Sancho Panza, Quixote’s bumbling sidekick. Todd Doering, a second-year graduate student in vocal performance from Sarasota, Fla. (7129 Queen Palm Circle), will portray Comacho.

Also in the cast are Hilary Maiberger, a second-year graduate student in vocal performance from San Diego, Calif. (1790 Country Club Drive), in the role of Quiteria, and Drew Ochoa, a junior vocal performance major from Toledo (2033 W. Alexis Road), as Basilio.

Dr. Ronald Shields, chair of the theatre and film department, will direct “El retablo” and is co-directing “Don Quichotte” with Dr. Michael Ellison, an associate professor of theatre and film. Kevin Bylsma, an instructor of music performance studies, is the music director for both works.

Advance tickets are $9 for students and senior citizens and $12 for other adults; the cost is an additional $3 each the day of the performance. Tickets can be purchased at the Moore Musical Arts Center box office weekdays from noon to 6 p.m., or reserved by calling 419-372-8171 or toll-free 800-589-2224. 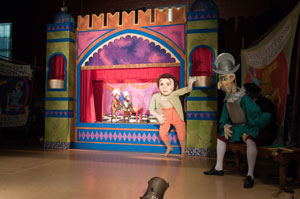