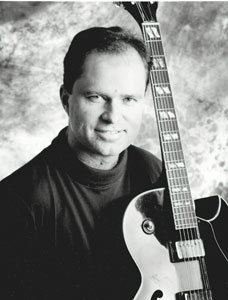 Hart is renowned for his adaptability and distinctive sound. He has recorded seven CDs of his own compositions and is a leader for the prestigious music labels Blue Note and Concord.

Hart began playing guitar at age 12 but didn’t become interested in jazz until age 16, when he was “bitten by the jazz bug” after hearing Miles Davis’ recording of “Porgy and Bess.”

He graduated from Miami University in 1983 with a bachelor’s degree in music and then toured internationally with Latin pop star Jose Luis Rodriguez. After returning from the tour, Hart moved to New York City in the summer of 1984. During the late 1980s, he performed as a member of the house band at the Apollo Theatre.

While Hart had recorded extensively backing various artists, his debut album as a leader, titled “One Down,” was released by Blue Note Records in 1990. In 1992, he recorded “Trust” with the John Hart Quartet, which featured young saxophonist Chris Potter. The quartet would go on to perform together for the next seven years.

Since 2000, Hart has toured with the John Hart Trio. The group recently released its third album, produced by Hep Records, titled “Standards—Green and Blue.”

Hart will begin his stay at BGSU with an open master class from 3:30-5 p.m. Wednesday in 2008 Moore Musical Arts Center. That evening, from 8:30 p.m. to midnight, Hart will perform with members of the Faculty Jazz Group at 149 North, located at 149 N. Main St., Bowling Green.

All other events are free and open to the public.