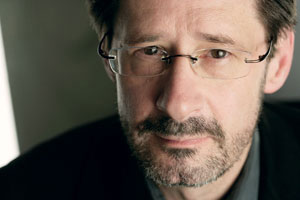 The festival will showcase the work of more than 20 guest composers and performers in concerts, lectures and workshops. Highlights will include world premieres of several works, a special late-night performance by the International Contemporary Ensemble at Clazel Entertainment, 127 N. Main St., on Oct. 22, and an all-electroacoustic concert on the afternoon of Oct. 23.

Stucky, the guest composer, received the 2005 Pulitzer Prize for music for his “Second Concerto for Orchestra.” A recording of his “Cradle Songs” by the vocal ensemble Chanticleer won a Grammy Award in 2000. The Given Foundation Professor of Composition at Cornell University, Stucky has written commissioned works for solo artists, many major American orchestras and for institutions such as Carnegie Hall, the Eastman School of Music and the BBC. He is also a writer on music and a conductor specializing in contemporary music.

Founded in 2001, the 30-member International Contemporary Ensemble (ICE) took first prize in the 2005 Chamber Music America/ASCAP Awards. The ensemble released its first critically acclaimed CD in 2007 and recently released a new album on the New York-based indie label New Focus Recordings. The New York Times has described ICE as “one of the most adventurous and accomplished groups in new music.”

The New Music Festival has hosted more than 300 guest composers and other musicians since its inception in 1980, including John Adams, John Cage, Philip Glass and Joan Tower.

Organized by the MidAmerican Center for Contemporary Music and the College of Musical Arts at BGSU, the festival supports the creation of new work and engages both the University and city communities in music appreciation and awareness. Nearly half the costs of this year’s event have been funded by a $10,000 grant to the MidAmerican Center from the National Endowment for the Arts’ 2009 Challenge America: Reaching Every Community initiative.

For a complete schedule of festival events, visit http://festival.bgsu.edu or contact the MidAmerican Center at 419-372-2685.