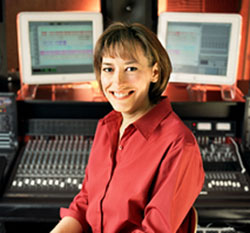 The Institut International de Musique Electroacoustic de Bourges (IMEB), an international organization dedicated to the research and creation of electroacoustic music, receives thousands of entries for the competition each year. An international jury, including members from France, Spain, Great Britain, Hungary and China, selected this year’s award recipients.

For her entry, Lillios will receive a cash prize of 2,500 euros and a performance of the work at the weeklong international Festival Synthèse in France during spring 2010. “Veiled Resonance” will also be included on a CD produced by IMEB, featuring the festival’s winning compositions.

“I’m thrilled to be awarded this prize,” Lillios commented, adding that in the 36 years the competition has been held, only nine American composers have been awarded a prize in this category. “Veiled Resonance” was commissioned by Steve Duke, saxophonist and Distinguished Research Professor at Northern Illinois University in DeKalb, and was composed over an eight-month period in 2008 while Lillios was on sabbatical.

“Steve called me one day and said ‘Hey, Elainie, it’s time to start another project,’” Lillios said. “It was really a collaborative effort.”

Lillios found her inspiration for the piece in the fifth stanza of “13 Ways of Looking at a Blackbird,” by poet Wallace Stevens. Each of the piece’s three movements is based on a different line from that stanza.

“A friend sent me [the poem] a few years ago thinking it might be inspiring,” Lillios said. “Steve and I wanted to come up with a concept for the piece that we both felt resonated with us, and I showed him this poem.”

She explained that the interactive composition is subtly different each time it is performed. The work relies upon the interaction between artist and computer to create the sounds heard by the audience.

Duke performs the piece with the computer on stage with him, using a foot pedal to control the composition’s unfolding. As he depresses the pedal, the computer responds, at times processing his saxophone playing in real time and other times playing pre-composed sound files. “Steve’s performing is integral to the success of this piece,” Lillios said. “He listens carefully and expertly explores the environment that I’ve created.”

“Veiled Resonance” premiered in April 2008 in Salt Lake City at the National Conference of the Society for ElectroAcoustic Music in the United States (SEAMUS). The society subsequently selected the work for its annual CD, “Music from SEAMUS Vol. 18,” which was released in July 2009.

The piece has been performed live five times, including a performance at BGSU’s 29th annual New Music Festival in 2008.