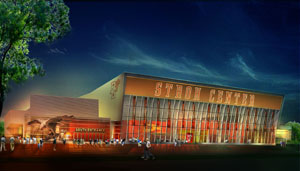 Construction of the state-of-the-art center is slated to begin in fall 2009 and be completed in late 2011. The Stroh Center will serve as the new home for Falcon basketball and volleyball and be used for graduation and other campus and public events.

According to the design team, the building’s look is intended to represent the aspirations of BGSU athletics. Prominently sited on Wooster Street and anchoring the southern edge of the athletic campus, the iconic building will mark the eastern gateway to the University.

The center is named for Kermit F. and Mary Lu Stroh and their family, longtime BGSU supporters who donated $7.7 million for the arena project earlier this year. The Stroh family’s contribution is the largest single private gift in BGSU’s nearly 100-year history.

"The Stroh Center will provide us with one of the best venues in the country, not just in our conference,” Kermit Stroh said. “We want opponents to know they are in for a tough fight every time they come to BG.”

According to BGSU interim president Dr. Carol Cartwright, the new arena will help meet a need both for the University and the community. “The center is a tremendous way to launch BGSU’s second century of service and it wouldn’t have been possible without the generosity of the Stroh family and our other donors,” she said. “It will be a wonderful asset to the entire community.”

Stroh added that it was important to his family that the arena be more than just an athletic complex.

“My late wife, Mary Lu, was a strong believer in a Bowling Green education and the Bowling Green experience,” Stroh said. “Whether it is a concert, a graduation or a community gathering, our BG friends and family will enjoy a truly first-class experience in the Stroh Center.”

According to the design team, the materials selected for the building are also symbolic. The building will be clad in metallic and glass materials representing the freshness of the University’s future, while grounded in masonry representing the foundation of its tradition.
The 131,000 square-foot building will also house the Champions Court practice facility, a BGSU team store, the BGSU Hall of Fame, the University’s main ticket office, athletic offices for men’s basketball, women’s basketball and women’s volleyball, conference and video rooms and sports medicine areas.

At the reception Christopher announced a new donation for the center–a $50,000 gift from John Harbal II, a BGSU trustee, and his wife, Kaye.

The $36 million dollar arena will be funded through a combination of private gift support and debt service. To date, the University has raised $12.8 million of the $14 million private fund-raising goal.

Stroh called on other members of the BGSU community to support the effort.

“I encourage every Falcon to step forward and join our family in making this transformational building a reality,” he said. “Please contribute as the number one facility in the Mid-American Conference rises on our campus. The time is now." 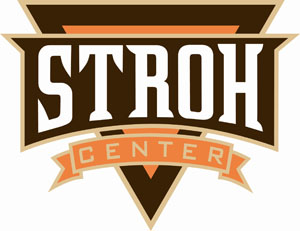