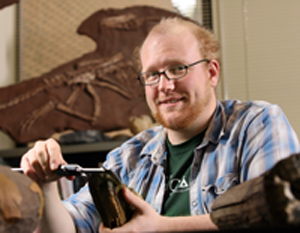 The 20-year-old rising senior from Milladore, Wis., learned this spring he would receive the Goldwater award, which covers the cost of tuition, fees, books, and room and board to a maximum of $7,500. The scholarships are awarded to academically outstanding sophomores and juniors majoring in natural sciences, mathematics or engineering who are interested in research careers.

“The Goldwater is very competitive,” according to Dr. Margaret Yacobucci, a BGSU associate professor of geology who is Linzmeier’s advisor. “They are awarded on the basis of academic performance and the student’s potential for success as a scientist. It’s a prestigious national honor and considered a strong plus when applying to graduate school.

“Certainly, Ben is very well qualified and enthusiastic,” Yacobucci added. “He has been very engaged in making opportunities for himself since he came to BGSU.”

The Goldwater Scholarship is the next step toward working in his chosen field, preferably as a university professor or curator and researcher.

Linzmeier is president of BGSU’s Geology Club and an Honors Program student. His childhood hero was Dr. Bob Bakker, the iconoclastic paleontologist he saw on Public Broadcasting Service documentaries. He avidly watched every program and studied dinosaurs while he was growing up, he said. He then looked for a college where he could study paleobiology, choosing BGSU because it is one of a few universities that offer paleontology as a concentration for undergraduates.

Paleobiology is the study of ancient life as recorded in the rock record. Bridging geology and biology, it looks at any remnant of early life such as shells, bones, footprints and burrows.

Linzmeier was also eager to do hands-on work in the field. He got that opportunity as a freshman by taking part in BGSU’s GeoJourney, a nine-week, cross-country, field-based course of study focusing on physical/historical geology, American and Native American culture studies and environmental studies.

“Right after my freshman year in college, I got my first internship. I spent 15 and a half weeks at the Mammoth Site in the Black Hills of South Dakota,” Linzmeier said. As one of four interns, he worked six days a week giving tours and conducting simulated digs for children with replica bones and using “air scribes” to prepare fossils for study.

“Most of my days off I volunteered in the casting and molding area. It was a lot of work and a lot of fun,” he said of the summer experience.

Then, last summer, he won a highly competitive paid internship, at the National Museum of Natural History at the Smithsonian Institution. As part of the Research Training Program (RTP), he worked on a project with Dr. Martin Buzas, one of the world’s leading experts on foraminifera (single-celled organisms with shells), and Dr. Lee-Ann Hayek, a mathematical statistician. They looked at recent foraminifera to learn about the effects of a drastic drop in salinity in the St. Lucie Inlet of Florida’s Indian River Lagoon in 2005, by measuring their numbers from before, during and after the drop. “The crisis decimated the ‘forams,’” Linzmeier said.

“Our project was called ‘Ammonia Test Morphology: A Quantitative Study of Variation.’ I measured 25-30 different traits on a single ‘foram’ to tease apart the species, and found variations between two species,” he said. “All the RTP students had to give a talk and poster presentation at the end of the 10 weeks. Working with Marty taught me I need to learn a lot more about statistics,” he said, adding that will come next year.

This summer brings a stay in Colorado and New Mexico for the required geology “field camp,” in which students learn how to measure and map stratigraphic sections of sedimentary rock.

The Barry M. Goldwater Scholarship and Excellence in Education Foundation has been a federally endowed agency since 1986. The Goldwater Scholarship Program was designed to honor the late senator from Arizona and to encourage outstanding students to pursue careers in the fields of mathematics, natural sciences and engineering. It is the premier undergraduate award of its type. (Reported by Bonnie Blankinship)