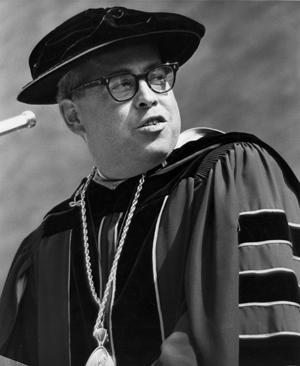 BGSU's sixth president led the institution during a period of rapid growth in enrollment, the creation of numerous graduate degree programs, and a building boom. BGSU Firelands in Huron became a reality under his watch, and nearly a dozen new buildings were constructed on the main campus. Among them was a new library, which Jerome called “the most important building we've built.” In 1982 that library was rededicated and named in his honor.

While the 1960s saw a dramatic period of growth in University history, it was also a turbulent time, with college protests against the Vietnam War. Campus unrest intensified after the Kent State University shootings on May 4, 1970. Under Jerome's leadership, Bowling Green was the only state university in Ohio to remain open after the Kent shootings.

Jerome left BGSU in June 1970 to become vice president for academic affairs and a consultant in the creation of Florida International University, which opened its doors to students in 1972. Jerome later became a Distinguished Professor of Management at Florida International, a position held until his retirement.

The former BGSU president had started his career in higher education as assistant to the president and an instructor in economics at Middlebury College in Vermont. He joined the Syracuse University business administration faculty in 1953 as an associate professor. He served as dean of Syracuse's College of Business Administration from 1958 until becoming president of BGSU in 1963.

He also was named an Honorary Alumnus by the BGSU Alumni Association in 1998.