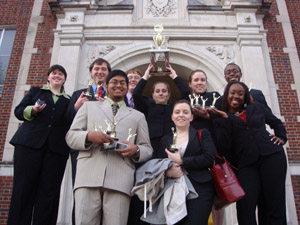 Rogers, a sociology major from Peoria, Ill., teamed with Cole, a communication major from Detroit, Mich., to win the Duo Interpretation event.

In addition, Rogers was the tournament's top speaker by virtue of his victory in the Pentathlon, a combination of scores from each contestant's five best events. He also competed in Duo Interpretation with freshman Ian Hatch, finishing fourth; took fifth in Dramatic Interpretation and sixth in Impromptu Speaking, and was a semifinalist (a top-12 placing) in Prose Interpretation.

Guha, an economics major from Beavercreek, won both Extemporaneous Speaking and Student Congress—in which participants propose and debate legislation—with near-perfect scores. He added a quarterfinalist (top 24) showing in Impromptu Speaking and was among the top 30 percent in After Dinner Speaking.

BGSU team members advanced to the quarterfinals or beyond in 27 of the 35 events they entered in the tournament, held March 7-9 in St. Louis with representatives from 51 colleges and universities.

Paul Wesley Alday, BGSU's director of forensics, speech and debate, said the team title was especially satisfying because two years ago, in its only previous trip to the tournament, Falcon forensics tied for first with Carson-Newman University. “It's very exciting because we were so close last time to winning it outright, but this time, we hit it out of the ballpark,” he said.

Semifinalist showings in Impromptu Speaking and Informative Speaking helped senior Michelle Baker of Loudonville to an 11th-place finish in the Pentathlon. Baker, who is majoring in communication and environmental policy, was also in the top 30 percent in Communication Analysis and Persuasive Speaking.

Rogers, Baker and Kayla Combs, a senior from Perrysville majoring in pre-veterinary medicine, are representing BGSU and Ohio this week in international competition hosted by the International Forensics Association in London. It is the first time Bowling Green has competed internationally since the 1920s, according to Alday, noting that the three BGSU participants qualified on the basis of their performance in tournaments during the regular season.

Other Falcon semifinalists in the national tournament were Hodgdon and Hensley, both in Informative Speaking. Hensley and Cole each reached the quarterfinals in Prose Interpretation, as did Hatch in Impromptu Speaking, while Hodgdon and Redfern were in the top 30 percent in Dramatic Interpretation and Extemporaneous Speaking, respectively.

The United States Air Force Academy, the University of Texas-El Paso, and Western Kentucky, Purdue and Central Michigan universities were among the other institutions represented at the tournament. It was open to members of all forensics honoraries and leagues, including the National, Collegiate and American Forensics associations, in addition to Pi Kappa Delta.