BGSU given $8 million gift, largest in its history 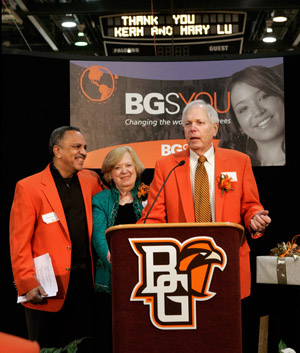 BGSU President Sidney Ribeau (left) and Mary Lu Stroh listen as her husband, Kermit Stroh talks about his family's love of Bowling Green State University during a Saturday afternoon (March 1) gift announcement. The Stroh family announced an $8 million gift which will in part support the construction of a new convocation center, to be named The Stroh Center.BOWLING GREEN, O.—An $8 million gift from a Wapakoneta family to Bowling Green State University will support several initiatives including construction of a new convocation center on campus.

On Saturday (March 1) Kermit F. and Mary Lu Stroh and their family announced the gift, which is the largest single private gift in BGSU's nearly 100-year history.

In addition to providing $7.7 million for the convocation center–to be called the Stroh Center–the donation includes $200,000 for intercollegiate athletics and $100,000 to be added to the already-established Stroh family endowed scholarship for students from Auglaize, Hardin, Logan, Mercer and Shelby counties.

The convocation center is an important project for the Strohs, who have spent a lot of hours at BGSU events in the current facility.

“Anderson Arena is a great venue with wonderful memories, but now is the time for the University to move ahead,” Stroh said. “Our family decided we'd like to lead the charge in creating a new convocation center for the University.”

The family's connection to BGSU started approximately 45 years ago when Stroh first visited the campus as a play-by-play announcer covering local high school teams for a Wapakoneta-area radio station. He was doing the job because he loved the local high school sports teams, and the station provided publicity for his fledgling propane gas company.

Those early visits resulted in a half-century relationship with the institution that includes bachelor's degrees for daughters Tracey Wright and Melissa Wansker, son-in-law and Bowling Green native Van Wright and grandsons Cameron and Alex Wright; a nine-year tenure as a board of trustee member, and a reputation for being among BGSU's most loyal cheerleaders.

Stroh served on the BGSU Board of Trustees from 1993 through 2002, including two terms as chair of the board. Following his service on the board, he received an honorary doctoral degree and was named an Honorary Alumnus. He also is co-chair of BGSU's Building Dreams Centennial Campaign. He and Mary Lu are members of Presidents Club and Falcon Club.

From the beginning, the people and programs at BGSU impressed Kermit and his family.

“Everyone I met on campus had a passion for BGSU and it showed,” he recalled. “And it remains the same today. When you come to BG and you interact with people, whether they are working on the catering staff, a member of the classified, administrative staff or faculty, they care about what goes on here. That's a trademark of the University.”

BGSU President Sidney A. Ribeau praised the Stroh family for its initiative to help make the convocation center project a priority. “For many years, Kerm, Mary Lu and the entire Stroh family have been true friends to BGSU. We are very fortunate to have their enthusiastic leadership for this important project that will impact the entire Bowling Green community,” Ribeau said

The Strohs have created   “a transformational gift,” according to J. Douglas Smith, vice president for University advancement. “Their generosity helps meet a significant need at the University as we prepare to embark on a second century.”

The impact that the Stroh Center will have on programs such as men's and women's basketball and volleyball is significant also, said BGSU Athletics Director Greg Christopher. “As we work to advance our athletic programs, our facilities are key to recruiting and attendance. The Stroh Center will be a shining example of BGSU's commitment to quality.”

“We hope the center will be much more than a basketball arena. We hope it will facilitate events, activities and opportunities for the BGSU and local community,” Stroh said. “We want it to offer versatility for business gatherings, concerts, convocations, and many different events.

“This is important to us,” he continued. “We've seen this University step forward and be innovative on many fronts. Other universities are trying to copy what we are doing. This will be another initiative that will put BGSU in the spotlight.”