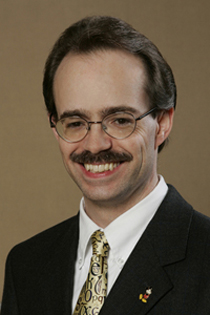 BOWLING GREEN, O.—It was about five years ago, toward the end of her master's degree program in educational administration and supervision at Bowling Green State University, that Angela Miller met Dr. Patrick Pauken. The associate professor of educational administration and leadership studies would be teaching her “Law, Ethics and Negotiations” class, and Miller's first thought was, “Who is this guy?”

He was, as it turned out, an educator instrumental in Miller's current pursuit of a doctorate at BGSU. So influential in fact, that she nominated him for the national 2007 Mensa Education & Research Foundation's Distinguished Teacher Award.

Pauken, who has taught at Bowling Green the past 10 years, was presented the national award by members of Maumee Valley Mensa during a meeting of BGSU School of Leadership and Policy Studies faculty on Dec. 3. The prize carries a $500 cash prize.

The honor “recognizes a teacher, professor or instructor at any educational level who has had an especially positive influence on the education or life of a Mensa member,” according to American Mensa. The only qualification for membership in the international society is a score in the top 2 percent of the general population on an approved standardized intelligence test.

Miller, a fifth-grade teacher in Upper Sandusky, has been a member of East Central Ohio Mensa for about seven years. In the nominating essay on which Pauken's selection was based, she described how he energized her interest in that first summer class in which they were teacher and student.

“Over the course of the semester, Dr. Pauken challenged me more than any other educator and helped fuel my passion for knowledge, reinvigorate my interest in law, and strengthen my intellectual confidence,” wrote Miller, who went on to earn her master's degree in August 2003.

“Not only was his intellect unparalleled, so were his expectations. I gave what I thought was my best, and he would demand more. Because of his persistence, I produced work of a quality I didn't realize I possessed. The end of the semester came, but it was only the beginning of his tremendous influence.”

Pauken is also graduate coordinator of BGSU's doctoral program in leadership studies, in which Miller is now pursuing a doctor of education degree. He is serving as adviser for her Ed.D. program, which is focused on the ethics of trying to balance the education of special education students with that of regular education students.

She has also taken courses in special education law and moral and ethical leadership from Pauken as part of her doctoral program. “He encourages debate, and just because it's not his point of view doesn't mean it's not worth discussing or keeping an open mind toward,” she said. “He epitomizes what a scholar should be.”

“To be recognized in any form by students is an honor,” said Pauken, expressing his appreciation for “the confirmation that the work I put in has positive impact.” Learning he had won the award was both surprising and “thrilling,” he said. “It really does mean a lot.”

The honor is not the first for Pauken, who chairs BGSU's Faculty Senate and received its Distinguished Service Award last year. The holder of a law degree from Ohio State University, he has a record of service to the University, the College of Education and Human Development, the School of Leadership and Policy Studies, and the educational administration and leadership studies programs.