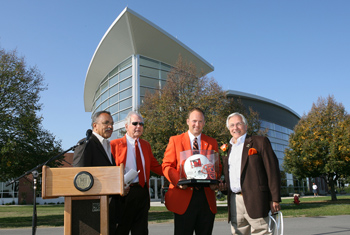 The Sebo Athletic Center provides expanded facilities for both, along with meeting and office space for BGSU athletics. The north-end “front door” to Doyt L. Perry Stadium was dedicated Saturday (Sept. 22) morning before the Falcons' first home football game of the season, a noon kickoff with Temple. More than 400 invited guests are expected at the dedication ceremonies.

The 42,500-square-foot center is named for retired businessman Robert Sebo, the 1958 BGSU graduate and current trustee who gave the lead gift of $3.5 million for its construction.

At about 9,400 square feet, the strength and conditioning room is nearly double the size of what has been the main training area, on the stadium's west side, said James Elsasser, assistant athletic director for internal affairs. Among the room's features are a floor made of recycled rubber tires and roughly $150,000 worth of weight equipment.

Treatment and rehabilitation spaces in the sports medicine area include a hydrotherapy room with hot and cold tubs and an underwater treadmill in a whirlpool with resistant jets.

A men's and a women's locker room are also on the ground floor of the three-story building, whose corridor connects it with the home football locker room and offices on the east side of the stadium.

On the center's second floor are conference rooms and athletic department administrative offices, while football coaches' offices and the Wilcox Boardroom are on the top floor. The boardroom and the balcony outside it overlook the stadium's new FieldTurf playing surface.

“It's (the center) a terrific addition to the Bowling Green campus, and its impact on our student-athletes is going to be tremendous,” said Christopher. “This is a building that will help all 425 student-athletes and 18 teams.”

“The building isn't just for football; it's a student-athlete center,” agreed Elsasser, who called it “the cornerstone of athletic buildings” on campus.

“The opening of the Sebo Center is the beginning of an exciting new era for all Bowling Green student-athletes,” added Stephanie Swiger, a Falcon volleyball player and president of the Student-Athlete Advisory Committee on campus.

Also pointing to the new strength and conditioning equipment and availability of “state-of-the-art rehabilitation,” the senior from Findlay said the center will “prove to be an important recruitment tool that will help BGSU attract top recruits.

“The addition of the Sebo Center has shown this University's commitment to its student-athletes, and we are all immensely grateful to have this new resource,” Swiger said.

A committee has helped to raise over $7.4 million in private money for the project. In addition to the lead gift from Sebo, a $550,000 donation came from Mike Weger, a BGSU football all-American who went on to a long NFL career in the 1960s and '70s. Giving $250,000 or more were John Bureau of Perrysburg and his late wife, Marilyn; Kermit and Mary Lu Stroh of Wapakoneta, and Toledoans Jan and Michael Wilcox, for whom the boardroom is named.

“We had people chip in and accomplish something that was desperately needed,” said Sebo, expressing his gratitude at seeing the building progress from conversations and a dream to reality. “We have just a great facility for our athletes to prepare themselves to compete in (NCAA) Division I, and if you don't have that, you can't compete.”

Michael Wilcox, also a BGSU trustee and member of the fund-raising committee, recalled that discussions about a student-athlete center began shortly after then-head football coach Urban Meyer came to Bowling Green in 2001. “We knew that state funds would not be available for such a building and also knew that we would need to have a ‘lead donor' to make such a project a reality,” he remembered.

“Bob Sebo has made a ‘transformational gift' that will benefit our student-athletes and teams for years to come,” said Wilcox, a former Falcon student-athlete. “As a trustee, and as donors, Jan and I are honored to be a part of it.”

Ground was broken for the building in December 2005. It has been a featured project of Building Dreams: The Centennial Campaign for Bowling Green State University, which has now raised more than $117.6 million toward a December 2008 goal of $120 million. The campaign's focus is to increase scholarships, enhance faculty and leadership positions, strengthen programs, build for tomorrow and sustain the University.

“Bob (Sebo) stepped up in a major leadership role for this project and the Building Dreams campaign in general at a very critical time,” noted Marcia Sloan Latta, senior associate vice president for University advancement and campaign director.

“His leadership has been exceptional, and others have followed suit,” she continued. “Today we have the opportunity to witness the incredible impact a building like this makes in the lives of our student-athletes, thanks to private philanthropy.”

Sebo, who lives in Salem, Ohio, also has made contributions to his alma mater for football and jazz studies scholarships, and for a lecture series in entrepreneurship in the College of Business Administration. He is a retired senior vice president at Paychex Inc., the Rochester, N.Y.-based payroll and human resource company.

In addition to Sebo, Christopher; Swiger; Wilcox; Michael Marsh of Bowling Green, chair of the BGSU Board of Trustees, and University President Sidney A. Ribeau took part in the ceremonies.