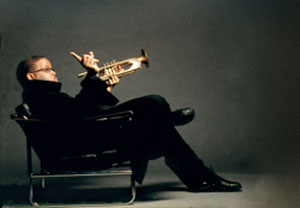 A Blue Note recording artist, Blanchard is one of the most prolific jazz musician to ever compose for motion pictures. Born and raised in New Orleans, where he studied with the Marsalis brothers at the famed New Orleans Center for the Creative Arts, he won a scholarship to Rutgers University and immediately began performing in the Lionel Hampton Orchestra.

Two years later he succeeded Wynton Marsalis in the legendary Jazz Messengers, before forming his own influential groups. He originally began performing on film director Spike Lee's soundtracks, including “Mo Better Blues,” in which he ghosted the trumpet for actor Denzel Washington.

Blanchard's visit to Bowling Green will include a variety of activities with students, faculty, staff and the general public. On Wednesday, Sept. 5, he and his band will perform a free jazz concert at 8 p.m. in Kobacker Hall of the Moore Musical Arts Center. Sidemen include Brice Winston, tenor sax; Fabian Almazan, piano; Derrick Hodge, bass, and Kendrick Scott, drums.

Also open to the public will be a screening of “25th Hour,” one of Blanchard's many collaborations with Lee, for whom he has composed numerous film scores .

“ 25th Hour” depicts the last day of freedom for a young man before he begins serving a seven-year jail term for drug dealing. Prowling through the city until dawn with his two close male friends and his girlfriend, he is forced to re-examine his life and how he got himself into his predicament, which leads to a shocking, disturbing finale. The 2003 film stars Ed Norton, Philip Seymour Hoffman and Rosario Dawson.

The 2 p.m. screening on Thursday, Sept. 6, in the Bowen-Thompson Student Union Theater will be followed by a question and answer session with the composer. Daniel Williams, an assistant professor in the Department of Theatre and Film, will be the moderator.

At 2:30 p.m. Friday, Sept. 7, Blanchard will speak to students and faculty at the Fall Convocation of the College of Musical Arts in Kobacker Hall. That evening, he will be a featured guest artist with the Toledo Jazz Orchestra at 8 p.m. in the Franciscan Center at Lourdes College in Sylvania.

Blanchard also will work with student jazz musicians, composers and film students during his residency, which is supported by Dorothy and DuWayne Hansen. Dorothy Hansen is an alumna of the College of Musical Arts, and DuWayne Hansen is a former chair of the Department of Music Education.

The Dorothy E. and DuWayne Hansen Musical Arts Series Fund was established in 1996 to bring to the campus and the Bowling Green community significant representatives of the musical and creative arts to share their talent and knowledge with undergraduate and graduate students in the college and with residents of the community.

This fall's residency is the fifth of the series. Sesame Street star Bob McGrath was the inaugural guest in 2003, followed by Broadway star Craig Schulman in 2004, and educator and researcher Dr. Howard Gardner in 2005. The husband and wife team of composer and critic Greg Sandow and Anne Midgette, arts critic for The New York Times , were the 2007 guests.

All residency events on the Bowling Green campus are free and open to the public. Contact the Franciscan Center box office at 419-824-3999 for ticket information at that venue.