BGSU music to ears of kindergarteners 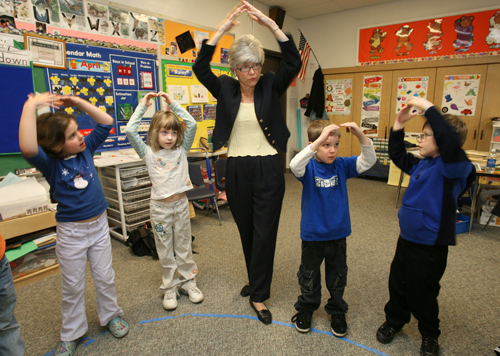 Dr. Joyce Eastlund Gromko (center) works with Weston Elementary School children who have been part of her Kindergarten Project this year. Raising their hands to represent the sun, as well as the high pitch at that point in the music, are (left to right) Roxanne Simpson, Jasmin Krassow, Tyler Spanfellner and Dylan Thomason.BOWLING GREEN, O.—Twice a week, Dr. Joyce Eastlund Gromko travels from Bowling Green State University to Weston Elementary School to work with kindergarteners, whom she's helping prepare for their music program May 14.

On May 1, however, the BGSU professor of music education visited Columbus to share her methods with another interested listener—Frances Strickland, first lady of Ohio. An educational psychologist by training, Gov. Ted Strickland's wife developed a widely used screening test for kindergarten-age children. Known for playing the guitar and singing, she is also an advocate for music education.

Having learned of their shared interests, Gromko wrote Strickland to tell her about the Kindergarten Project, which the BGSU faculty member started at Bowling Green in 1992. Each semester her advanced methods students teach music to kindergarteners in several Bowling Green schools and at Weston and Haskins schools, both in the Otsego district.

“We know from our research that our Kindergarten Project benefits the children musically and in their performance of phonemic (speech sound) awareness,” Gromko wrote, and invited the first lady to visit any of the classrooms.

A few weeks later, Gromko received a phone message from Michelle Hardin, Strickland's administrative assistant. Saying she and Strickland are working on a music project for children, Hardin asked about getting a music book and accompanying CD that Gromko had also mentioned in her letter.

The book and CD were new elements of the project this spring, funded by Continuing & Extended Education at BGSU and private donors, and sent home with about 400 students at the project's six school sites.

The materials let the children share with their parents the 10 folk songs they had already learned at school, part of an effort “to build children's aural perception of high/low, fast/slow, and loud/soft sounds,” Gromko explained in a follow-up letter to Hardin.

“We follow a sequence that builds auditory memory skills: chanting the words, clapping 'the way the words go,' and singing,” she wrote. “After children can sing the folk song, we add a body percussion and instruments that reinforce their perception of high/low and fast/slow.”

Finally, the kindergarteners touch pictorial notations of the songs; those “touch charts” comprise the book, which includes instructions for parents. Tracy Bender, a senior graphic design major who works in the BGSU College of Musical Arts' public events office, did illustrations and layout for the book, while Tina Bunce, the college's publicity/publications manager, served as an editor.

At Weston, kindergarten teacher Kirstina Roberts said she can see the benefit the project has beyond music. The children follow a beat and track movement, going left to right, with the music. Reading also involves tracking, moving left to right, and following a pattern, Roberts pointed out, saying, “I know it (the music instruction) helps them with their reading skills.”

“We're trying to get at why these skills are related,” added Gromko, an editorial board member of the Journal of Research in Music Education. If they are related, there must be a cognitive mechanism that's shared, she said, noting her belief that children use the same mechanism to remember their telephone number as when they're learning a set of words or a tune.

Gromko said as a result of her meeting with Ohio's first lady, Strickland has accepted an invitation to visit schools participating in the program.