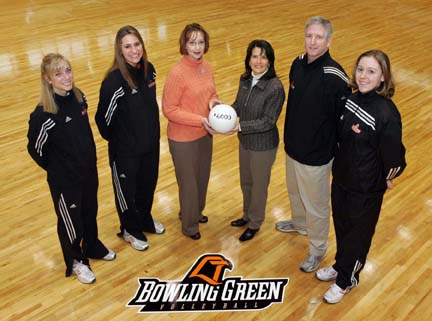 The Bowling Green State University Volleyball team presents $6000 to the Red Cross as part of their hurricane relief fund-raiser titled, "Kills for Katrina" and "Digs for Dollars". Present is, from left, Elizabeth Simon, a sophomore from Bowling Green; Crissy Gothke, a junior from Whitehouse; Erin Hachtel of the Red Cross; Coach Denise Van De Walle; assistant coach Mark Hardaway, and Stephanie Swiger, a sophomore from Findlay.

BOWLING GREEN, O.—Denise Van De Walle was no doubt among many Americans who, when they heard that Hurricane Katrina had struck the Gulf Coast, thought “we have to do something for those people.”

For the Bowling Green State University volleyball coach, that “something” literally became a team effort.

Van De Walle’s players wound up raising $6,000 for hurricane relief through “Kills for Katrina and Digs for Dollars,” in which sponsors pledged a specified amount for each point-scoring kill, and/or point-saving dig, by a particular team member this season.

Van De Walle presented the money on Dec. 22 to Erin Hachtel, Wood County office director for the Greater Toledo Area Chapter of the American Red Cross. The funds raised provide for food, clothing, shelter and any other basic emergency needs of the victims, including prescription drug and mental health needs, Hachtel said.

“I didn’t know how much we could actually raise,” said Van De Walle, who led the effort with a pledge of $1 for every kill her team recorded. The Falcons compiled 1,762 kills en route to an 18-14 record.

“It was just neat because we tried to involve every player,” the coach said. She came up with “Kills for Katrina”—provided by front-row players—before “Digs for Dollars” added their back-row teammates to the mix.

The players first heard Van De Walle’s idea the weekend after the hurricane hit, at the Falcons’ season-opening tournament in Chicago. “All of our families really jumped into it,” said Stephanie Swiger, a sophomore from Findlay who raised $462 through her play.

Generating the most money via pledges was Emily Manser, a senior from Westerville, with more than $675. Maggie Karges, a sophomore from Joliet, Ill., collected more than $640, while Meghan Mohr, a freshman from Elida, was responsible for $552 of the total. “

I don’t think anybody who’s been to that (Gulf Coast) region hasn’t come back touched,” said Hachtel, who thanked Van De Walle and her players for their contribution to the recovery effort. “This is just really exciting.”