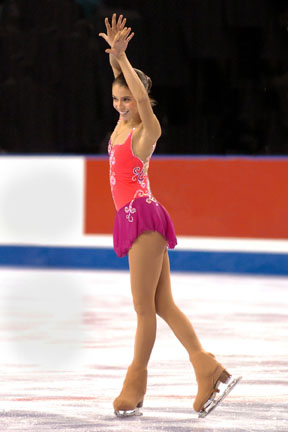 A native of Bowling Green and a sophomore at BGSU, Czisny is competing at the U.S. Figure Skating Championships Jan. 12-14 in St. Louis, Mo., in hopes of qualifying for the 2006 U.S. Olympic team.

She'll be vying for a top-three finish against some of the best skaters in the world, including five-time world champion Michelle Kwan, two-time World silver medalist Sasha Cohen and 2005 World bronze medalist Emily Hughes.

Everyone is invited to BGSU's Ice Arena for an 8 p.m. exhibition on Wednesday (Dec. 21) featuring Detroit and Bowling Green skaters who are Czisny's friends and fans. An autograph and photo session with the Skate Canada gold medalist, and free public skating at the arena will follow at 8:30 p.m.

The first 300 youths in attendance will receive publicity photos.

Alissa and Amber, who also is a BGSU sophomore, began their skating careers at the campus ice arena as toddlers. The sisters have worked under the tutelage of several local professionals, and currently train at the Detroit Skating Club. Amber specializes in ice dancing.

Many in Bowling Green want to see the 18-year-old twins follow in the footsteps of native son and Olympic gold medalist Scott Hamilton—who, by the way, also learned to skate at the BGSU ice arena.

While Cohen and Kwan remain the top two favorites, this year Alissa Czisny has a chance for the third spot on the U.S. women's figure skating team.

After winning the silver medal at the 2005 Smart Ones Skate America, she captured the gold medal at Skate Canada with a stunning performance as a last-minute substitute. That qualified her to compete in the Grand Prix Final Dec.16-18 in Tokyo, Japan, making her the only American woman competing there.

As commentator Dick Button pointed out when she appeared at the recent Marshalls U.S. Figure Skating Challenge in Boston, the ever-graceful figure skater is having an exceptional season. Last year Czisny finished seventh at nationals; this year, she is “sizzling” Czisny.

In addition to the features about her in USA Today, other major newspapers and sports publications, a production crew has followed her around BGSU and the ice rinks where she trains, for a forthcoming TV documentary.

Wednesday night's event in her honor is hosted by the BGSU Skating Club, which is sanctioned by U.S. Figure Skating, and is sponsored by the ice arena, BGSU's Office of the Executive Vice President, and Jackson Ultima Skates.