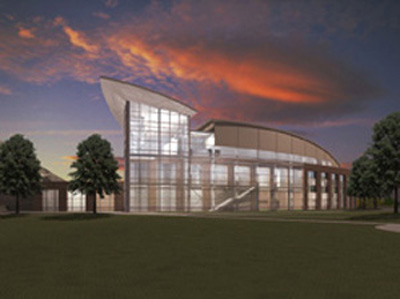 An architect’s rendering shows what the new Sebo Athletic Center will look like when its completed in 2007.

Bob and Karen Sebo (pronounced SEE-BOE) of Salem, Ohio, for whom the structure is named, contributed $3.5 million toward a goal of $7 million being raised to support construction of the facility. They, along with BGSU President Sidney Ribeau and Athletic Director Paul Krebs, took part in the groundbreaking ceremonies at the north end of Doyt Perry Stadium.

Also lifting shovels were Sharon Cook of Upper Arlington, chair of the BGSU Board of Trustees, and Falcon football linebacker Teddy Piepkow (pronounced PIP-COE) of Clark Lake, Mich., a senior marketing major and president of the BGSU Student-Athlete Advisory Council.

The unique, three-story structure will become the new “front door” of Perry Stadium. With approximately 42,500 square feet, the center will provide modern sports medicine-rehabilitation and strength-training facilities; a balcony overlooking the playing field; offices for the football coaches; teaching space for coaches and players; a video editing room; team meeting rooms, and a coaches' conference room.

“There are few events in a lifetime where you can look back and say, 'Boy, I remember that day,'” said Krebs, addressing the more than 100 onlookers who gathered for the groundbreaking. For the BGSU athletic department, Friday was one such day, he said.

“This is an extremely important element of a vision we have for intercollegiate athletics,” added Ribeau. The University aims to field competitive teams in every sport, and “this facility will give us an opportunity to do that,” he said.

BGSU offers 18 varsity sports and is one of only 14 schools in the nation with NCAA Division I football, hockey, and men's and women's basketball. The center will benefit all varsity sports programs and more than 430 student athletes.

Sebo, a 1958 graduate of Bowling Green, is a member of the University's Board of Trustees and a staunch supporter of Falcon athletics.

A good athletic program benefits the entire University, Sebo said. “Winning teams generate a really positive attitude” on campus, and those good feelings stay with students as they become alumni who support academic, as well as athletic, programs, he explained.

In Division I, “you really have to be strong and well-conditioned to compete,” he noted, expressing his hope that the center will contribute to the health of student-athletes and to successful recruiting and teams.

To date, 79 individual and corporate donors have pledged $5,218,730 for construction of the Sebo Athletic Center, which is scheduled for completion in 2007.

Contributions to the center are counted as part of Building Dreams: The Centennial Campaign for Bowling Green State University. The focus of the $120 million fund-raising campaign, which continues through December 2008, is to increase scholarships, enhance faculty and leadership positions, strengthen programs, build for tomorrow and sustain the University. More than $86 million already has been committed to the campaign.

The general contractor for the new facility is J. L. Judge Construction Services of Detroit, and the architects are Sink Combs Dethlefs of Denver and Technicon Design Group of Ottawa, Ohio.