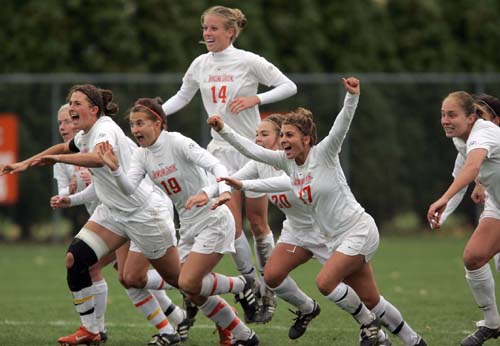 The women’s soccer team has lost only six of 22 matches this season, including a 1-0 setback at Michigan State University on Sept. 9. Now, the Falcons are getting a rematch on a bigger stage.
BGSU will travel to Notre Dame, Ind., Friday (Nov. 11) to open the NCAA Division I tournament against the Spartans. Kickoff will be at 5 p.m.

The Falcons will take a 14-6-2 record into the match, whose winner will face the winner of a Friday night match between Valparaiso and defending national champion Notre Dame. The second-round match will be played Sunday (Nov. 13). Last year, in their first-ever trip to the national tournament, the Falcons fell in the first round to Ohio
State, 2-0.

Bowling Green, which also won the MAC regular-season championship this year, has played Michigan State every year since BGSU added the sport on the varsity level in 1997. The Spartans (11-5-5 in 2005) lead the series with the Falcons, 7-1-1.