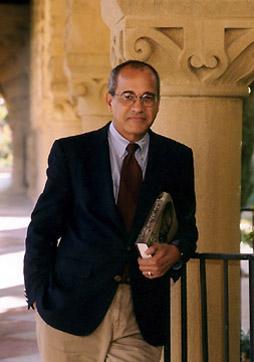 BOWLING GREEN, O.—Noted scholar, critic and biographer Dr. Arnold Rampersad will make the first of three visits to Bowling Green State University next week as the 2005-06 President’s Visiting Scholar in the Humanities.

A 1991 winner of a $300,000 MacArthur Foundation Fellowship (often called the “genius award”), the BGSU alumnus is senior associate dean for the humanities and Sarah Hart Kimball Professor in the Humanities at Stanford University.

During his visit Sept. 13-15, Rampersad will meet with students, faculty and administrators and give two public talks. He will discuss issues in sports and the humanities, two key areas of his writing and teaching.

Rampersad grew up in Trinidad and came to the United States in 1965. He earned bachelor’s and master’s degrees in English from Bowling Green in 1967 and 1968, respectively. He went on to Harvard University, where he received a doctorate in English and American literature in 1973.

His life’s work has centered on interpreting the African-American experience through the lens of biography. His prize-winning books include “The Art and Imagination of W.E.B. DuBois”; “The Life of Langston Hughes” (two volumes); “Days of Grace: A Memoir,” co-authored with tennis legend Arthur Ashe, and “Jackie Robinson: A Biography.”

He also has edited several volumes, including “Collected Poems of Langston Hughes”; the Library of America edition (two volumes) of works by Richard Wright, including revised individual editions of “Native Son” and “Black Boy”; and, as co-editor, “Slavery and the Literary Imagination.” He also is co-editor of the Race and American Culture book series published by Oxford University Press.

Currently he is writing a biography of the novelist Ralph Ellison.

On Tuesday (Sept. 13), he will meet with students in a history and philosophy of sport class and hold an afternoon seminar on biography and sport culture for graduate students in various disciplines.

On Wednesday (Sept. 14), he will participate in a panel discussion on “The Changing Faces of Women in Sport” beginning at 3 p.m. in 308 Bowen-Thompson Student Union. Also on the panel will be Dr. Janet Parks, Distinguished Teaching Professor Emeritus of human movement, sport and leisure studies, and Janna Blais, associate athletic director and senior woman administrator. The panelists will discuss the history of Title IX, how BGSU has addressed Title IX, and new developments and opportunities for women in sport. A reception will follow the panel discussion, which is open to all.

On Thursday (Sept. 15), Rampersad will speak at this year’s first Arts and Sciences Forum. During his address, titled “The Humanities in a Changing World,” he will discuss the future of the humanities and the pressures they face in both university curricula and in a world increasingly shaped by science and technology. The forum will begin with lunch at noon in 207 Union. To make lunch reservations, email mjhitt@bgsu.edu. Rampersad’s talk, which is free, will start at 12:30 p.m.

Jerome Library has mounted a special exhibit in the main lobby in honor of Rampersad’s initial visit. The author will return to campus in January, when his focus will be on American literature.

Rampersad was a member of Stanford's English department from 1974-83 before returning there in 1998. In the intervening years he taught at Rutgers, Columbia and Princeton, where, during his eight-year tenure, he held the Woodrow Wilson Professorship of Literature and served as director of the programs in American studies and Afro-American studies.

In addition to receiving a MacArthur Foundation Fellowship, whose recipients are chosen on the basis of their talent, creativity and the potential benefit of their work to society, Rampersad’s accomplishments were recognized by BGSU in 1992 when he was presented the Distinguished Alumnus Award.

The first President’s Visiting Scholar was Dr. William Julius Wilson of Harvard, who visited campus in 2002.