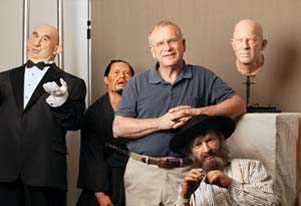 BOWLING GREEN, O.--His students know he’s a winner, as do his peers in the animatronics business. Now Dr. Gene Poor has received recognition from the business community for his remarkable vision and success in a field he helped create.

Poor, who teaches in Bowling Green State University’s College of Technology, is among the 2004 winners of the northwest Ohio “Entrepreneur of the Year Award” presented by the accounting firm Ernst and Young.

The owner of LifeFormations animatronics studio in Bowling Green, Poor began the visual communications department at the University in 1972. Both ventures have since experienced tremendous growth and achievements.

“It’s an honor to win this award,” Poor said. “I was happy to win it because I wanted all the people who bought into my dream to have a piece of this, especially the seven or eight people I consider to be the core of the company.”

About a third of LifeFormations’ employees are BGSU graduates who have completed technology internships with the company, Poor said. This summer, three Bowling Green students are interning there.

Being involved in the industry “enriches what takes place in the classroom,” says the professor, who will teach “Innovation Technology” (TECH 402) fall semester in the University’s minor degree program in entrepreneurship.

“You’re not just teaching it, you’re doing it. You know the problems and you’re going from theorizing to applying what you know.”

LifeFormations employee Mike Blasko, who received a bachelor of science degree in VCT in 2002 from BGSU, said, “It’s very important to have Gene’s experience and industry ties to bridge that gap between the classroom and what’s happing in the industry. It’s great to be able to come here and see how what you’re doing in the classroom applies in the real world.”

Blasko, a native of North Royalton who is now pursuing a master’s degree in technology education at BGSU, met Poor as an undergraduate and discovered they shared an interest in collecting neon signs. He began to work part time at LifeFormations and eventually completed two co-ops with the company before being hired full time as an electronics specialist.

In the meantime, he was able to “tag along” on installations and focused his involvement on the electronics end of the business. From an educational perspective, “seeing the interaction with suppliers, vendors, contractors and clients gives that real world connection,” Blasko said.

A recent visit to the company found Blasko putting the finishing touches on a life-size figure of legendary Louisiana Governor Huey Long. The most advanced animatronic figure LifeFormations has created, its sophisticated and complex computer program will allow the figure full range of natural motion, to be accompanied by an audio track of the politician speaking. The bronze-finish figure will reside in Baton Rouge when completed.

“Gene is very inspired and very motivated. It’s always an interesting experience working with him,” Blasko said of his boss and mentor.

In presenting the entrepreneurship awards, Larry Davenport, a partner in the accounting firm, said the winners had to be both smart and strong to survive. “They trekked through the jungle of opportunity and found their way to success,” Davenport noted at the June 7 awards ceremony in Toledo.

Poor fits that description well. He has managed to not only maintain his company but also to continue expansion at a time when similar ventures have been forced to shut their doors.

The once-thriving industry was reduced by about half following Sept. 11, 2001, as businesses were mired in uncertainty about the future of tourism and the demand for their product. LifeFormations is now one of just four animatronics studios in existence, Poor said. “Even a fun company has to make payroll,” he noted.

The company, which makes both static and animated figures for museums, theme parks, retail operations and even restaurants, has grown from its original five employees to about 35 today.

Its current projects include creating 50 characters for the Lincoln Library in Illinois and others for an African-American museum in Detroit; producing the characters for a “dark ride” about the biblical Solomon for a religious theme park in Israel; working on the new animated representative for the soft drink 7-Up, and making animated figures of Jekyll and Hyde for a new, themed restaurant in New York City.

A visit to the business in Bowling Green can be unnerving, with startlingly lifelike characters ranged around every nook and corner, in various states of completion. In one workshop, employees build the large frames of the characters, from humans to horses, while in another area, three women surrounded by a motley crew of full-size Yukon miners, Chinese gong-players, fur trappers, pygmy warriors, Eskimo hunters and Indians, painstakingly apply individual hairs to the heads of other characters. Nearby, another employee works on a likeness of former Cincinnati Reds and Detroit Tigers manager Sparky Anderson.

The hyper-realistic look is a trademark of LifeFormations and reflects the commitment to quality that has helped make the business so successful.

It can take about 30 hours to complete a full “poked-hair” head, according to BGSU graduate Julie Simon, a LifeFormations who was worked recently on a head of former Egyptian President Gamal Abdel Nasser.

Simon, like other employees, has also served as a model for characters’ limbs when needed. “Those are my arms on Mary Todd Lincoln,” she pointed out.

Poor says he is always looking for fresh avenues for the company’s products. He has recently begun selling the lifelike figures through select galleries.

“It’s a wonderful experience to bring things to life,” he said, describing animatronics as “truly a marriage of art and technology.”

A technologist at Kent State University before coming to BGSU in 1970, he said animatronics is the perfect field for him, combing work with wood, metal, electronics, hydraulics and many other elements to create animation from static characters. Over the years, he has animated everything from cars to kitchen items.

“I’ve always been involved in working with business and industry,” he said. While teaching at BGSU in the 1970s, he also worked with a display company in Toledo.

“I convinced them to let me make the products come alive and tell the story,” he said. “Anything you could want to sell, we would bring to life.” He founded LifeFormations in 1981 as a division of that company, and later bought it from them and moved it to Bowling Green

In addition to teaching and running the company, Poor has written two books, “The Illusion of Life: Lifelike Robotics,” published in 1991 by Creative Learning Systems, and “Animatronics: A Designer’s Resource Guide,” co-authored with Rodney Heiligmann, a Bowling Green instructor of visual communication technology, and published in 2003 by Ian Hunter Publishers.