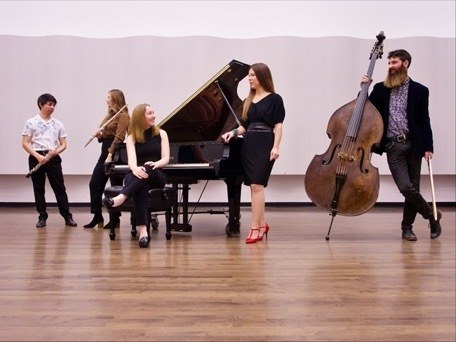 BGSU Graduate Ensemble Newphonia participated in a two-part residency at Interlochen Center for the Arts in Interlochen, MI. Newphonia has been playing and performing together since the fall of 2020 and is comprised of five Doctoral students from the BGSU’s College of Musical Arts. Their members include: Claudia Aizaga, flute; David Munro, oboe; Sandy Coursey, piano; Katherine Pracht Phares, mezzo-soprano; and Adam Har-zvi, Bass. The initial concept for the group was a flexible-instrumentation chamber ensemble, with the potential for a full quintet. Since their formation, the group has had several pieces written for them, some of which utilize the whole quintet, and some of which only use two to three members.

The group’s connection to Interlochen formed because of connections made by flautist Claudia Aizaga. Claudia worked at Interlochen’s Summer Arts Camp, where she connected with the Director of Music, Enrique Marquez. They collaborated on the formation of the Newphonia residency together along with Dr. Cynthia Van Maanen, the instructor of composition and theory at Interlochen. To set the residency in motion, Dr.Van Maanen brought several of her students to BGSU’s 42nd New Music Festival, where she and her students were able to meet the members of Newphonia and begin planning the details of their residency at Interlochen. After meeting virtually a couple more times to hammer out the details, Newphonia traveled to Interlochen for the first part of their residency, which lasted from November 16th to 18th.

Dr. Van Maanen’s students presented the group with sketches of the works they had composed for Newphonia. The students used a variety of configurations for the group, with a couple students opting to utilize all five members in their compositions. Some other students chose to include Interlochen faculty members or fellow students as part of their compositions as well. In addition to workshopping the composition students’ sketches, Newphonia also gave presentations to classes on running a professional chamber ensemble, collaborating with composers, writing for the performers in the group, and text setting for voice. Newphonia concluded the first part of their residency with a recital, featuring works by Adam Har-zvi, Cory Brodack, Neda Nadim, Hayden Stacki, and Antal Dorati (with the Dorati being the only work not commissioned by the group). Throughout the first part of this residency, the students at Interlochen seemed to very excited about working with the group and engaged with what they had to say and present.

For the second part of Newphonia’s residency at Interlochen, the group will return on February 24th and stay through the 27th. They will perform a Composer’s Concert, featuring the nine works written for them by the Interlochen students. This second residency gives Newphonia time to connect with each of the students on their pieces as well as rehearse with the collaborators who are on faculty at Interlochen (for those students who chose to include non-Newphonia members in their compositions). Each student composition will be around five to six minutes in length. In addition to faculty collaborators, Newphonia will also be joined by fellow BGSU Doctoral student, Keri Lee Pierson (soprano).

For Newphonia, the residency provides an opportunity to build new connections, helps young musicians grow in their artistry, and develops and expands the available repertoire for the ensemble. Their residency at Interlochen was funded by an award from the MidAmerican Center for Contemporary Music, which Newphonia received in 2021. - Garrett Evans, DMA, Saxophone