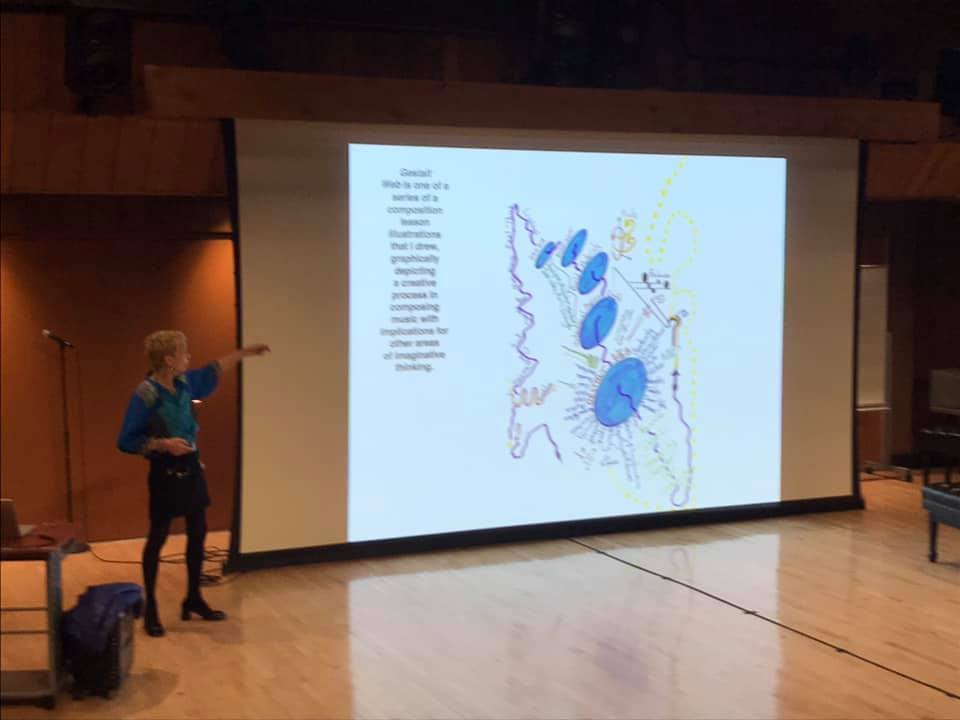 As musicians across the world continued to navigate the murky waters of pandemic-era performance in fall 2021, Bowling Green State University’s 42nd annual New Music Festival offered a beacon of normalcy. Composer Augusta Read Thomas returned to BGSU this past October as the featured composer, following the 2020 festival’s virtual presentation. Comprising six immense concerts and an opening lecture from Thomas, the three-day festival was some of the first live music I personally had both performed and attended in well over a year.

The scope of this year’s New Music Festival ranged from solos, duets and trios to wind ensembles, orchestras and choirs. Violist Michael Hall, accompanied by pianist Marianne Parker, showcased works composed predominantly in 2020. Contributions to this program included pieces by Stacy Garrop, Francine Trester, and others. The BGSU Wind Symphony, led by Dr. Kenneth Thompson, performed works by Marilyn Shrude, Piyawat Louilarppraesert, and Omar Thomas. Soloists from across the BGSU faculty and DMA student body presented music by composers like Viet Cuong, Hannah Lash, Cory Brodack, and BGSU DMA-student Adam Har-Zvi. Members of the BGSU percussion studio performed Third Coast Percussion’s Paddle to the Sea. Written in 2017, this three-movement work tells the story of a toy canoe made by a Native Canadian boy and the journey it takes along the waterways of Canada. The percussion sextet was a delight to watch, as the work is imbued with a sense of playful and effortless vitality.

Ten works by Augusta Read Thomas were interspersed among the three-day festival, including the premiere of her 2020 piece Rings of Light for nine saxophones. Featuring the BGSU Saxophone Ensemble, Rings of Light reflects Thomas’s desire for an organic, naturally evolving “sound sculpture.” Bright and resonant, the fanfare’s sonorous timbre was met with great applause from an excited audience. BGSU’s voice coordinator and tenor Christopher Scholl, accompanied by Kevin Bylsma, performed a stunning rendition of Thomas’s 2019 work Your Kiss. Scholl’s sensitive musicality lended a timeless quality to the setting of E.E. Cumming’s poem i have found what you are like.

Much like her music, Thomas’s lecture was a fiercely vibrant discourse on the spontaneity and balance she seeks to communicate in her work. Exploring her improvisatory compositional process through examples of beautifully abstract graphic scores, Thomas described to a captivated audience her ideas of music “actively becoming,” unfurling its energy in a natural way. She delved into some of her influences like Louis Armstrong and Ella Fitzgerald, and the extended harmonies found in the sound worlds of jazz and big band. Throughout her talk, Thomas interwove colorful metaphors to portray how her goal is to allow musical material to prescribe the form of her work, and take on a life of its own.

Thomas opened the festival by noting, “The reason I compose is to express gratitude.” I could not think of a more apt theme for this year’s endeavors. As I sat among an audience hungry for live music and stood in the darkness behind the curtain of Kobacker Hall, gratitude seeped through every sound on the stage. After a tumultuous year of detached, virtual performance experiences, the knowledge that people would still come to a new music concert charged each performance with an exquisitely hopeful energy that had to be felt to be believed.