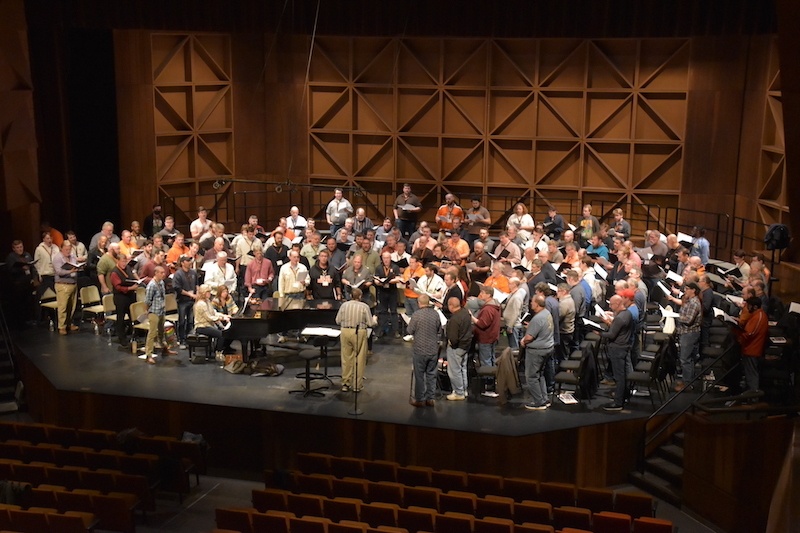 On April 9, 2022, one hundred twenty-five men returned to campus to celebrate 50th anniversary season of the BGSU Men’s Chorus. This Alumni Men’s Chorus consisted of alums from as early as 1972 through as recent as 2021. If gathering to sing, reconnect, and meet new friends wasn’t enough, the guest conducting appearance of Men’s Chorus emeritus director Richard D. Mathey created an over-the-top buzz to maintain the energy through an entire day of rehearsing, socializing, and performing.

Current director and alum of the Men’s Chorus, Dr. Richard Schnipke (1993), had been planning this event for three years as a build up to the 50th Anniversary year, but the pandemic forced cancelling the event in both 2020 and 2021. Former directors RD Mathey and Bill Skoog were both scheduled as guest conductors, but Skoog was unable to attend at the last minute and Men’s Chorus alum and veteran choral director Ben Ayling (1980, 1989) happily agreed to step in. Mathey and Ayling rehearsed the Alumni Men’s Chorus throughout the day and performed seven numbers that evening on the concert. The current BGSU Men’s Chorus performed after intermission with several engaging works and the combined Alumni group and Men’s Chorus joined forces for the grand finale, which of course included Grieg’s Brothers Sing On! and the BGSU Alma Mater. The combined choirs also sang a rousing new arrangement of the BGSU Fight Song, Forward Falcons, conducted by alum and arranger Will Baughman (2015).

Professor Richard Tunnicliffe began the Men’s Glee Club and Male Quartet in 1920. There were several iterations of male choral singing at BGSU that followed, but none that held on continuously until RD Mathey reestablished the group as the Men’s Chorus in 1971. Since then, the Chorus has entertained audiences on and off campus, toured throughout the country, promoted choral singing and music education, and created brotherhood for thousands of men in “American’s Finest Singing Machine.”