Music at the Forefront: Ekmeles 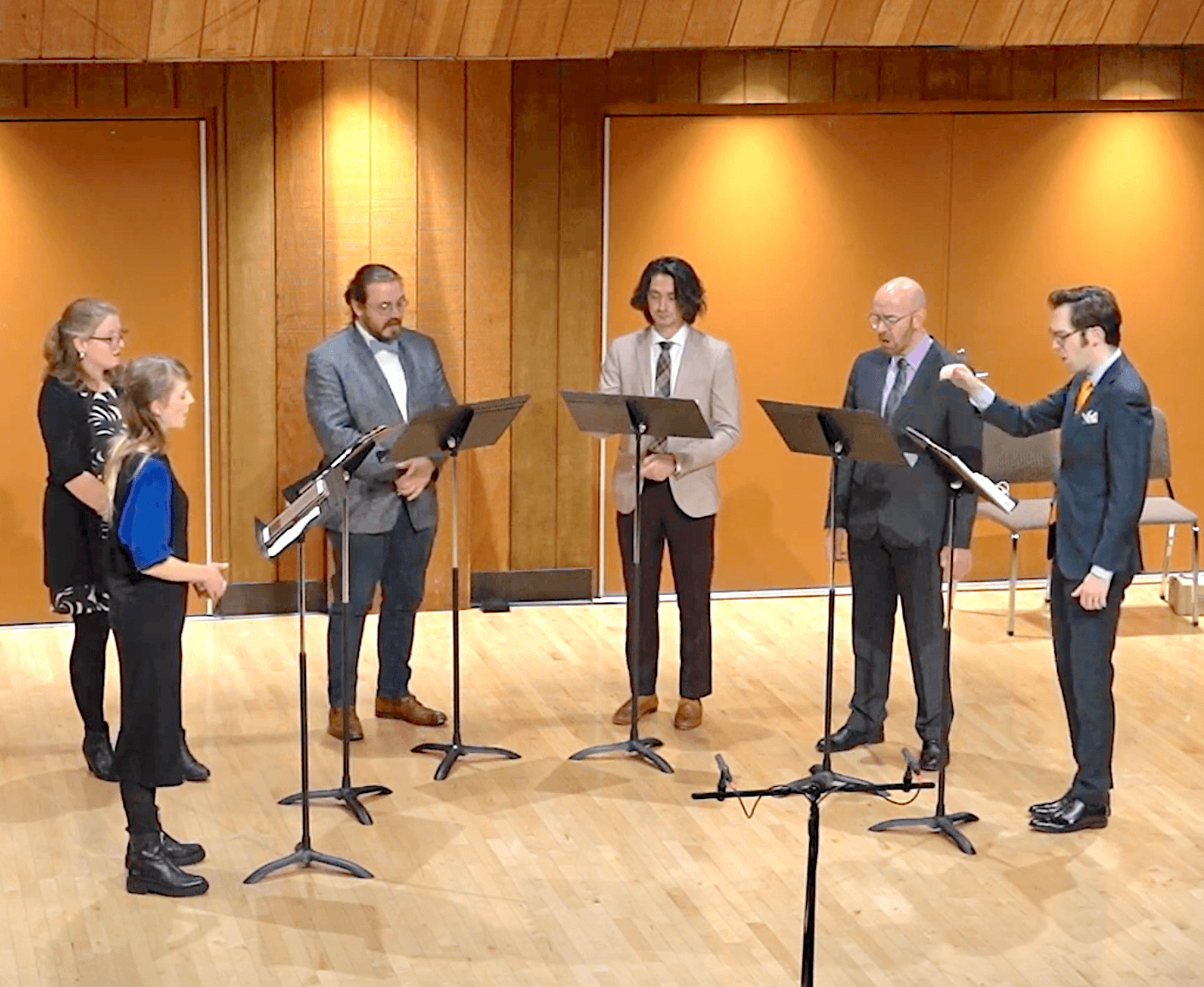 This past November, the MidAmerican Center for Contemporary Music's Music at the Forefront series hosted the remarkable New York-based vocal sextet Ekmeles. The ensemble’s website defines their name as an Ancient Greek term for “tones of indefinite pitch and intervals with complex ratios, tones ‘not appropriate for musical usage.’” In action, they show off their high level of musicianship through a selection of repertoire featuring microtonality, versatility, and the avant-garde. Their November performance presented a cappella works by an array of living composers, and featured precision and sensitivity that showcased the talent of the singers.

As a voice student at BGSU, I was delighted to experience the residency of a vocal ensemble, especially one focused on contemporary and rarely-heard repertoire. My colleague Katherine Pracht-Phares concurred: “Having a vocal ensemble of Ekmeles’s caliber at BGSU was a real treat…They were impressive, fun, and inspiring.” From the start to the finish of their performance, they showed the finesse and awareness of accomplished musicians, and their stage presence was captivating and entertaining.

Of the five pieces performed, only two involved the full group, which gave a nice mixture and range of sounds. Shawn Jaeger’s quartet love is was characterized by unison textures, dissonance, and beautiful blending: the singers’ technical control was immediately evident and profound. Pokój w pokoju (Polish for “piece in the room”) was another quartet composed by Nirmali Fenn, and again showcased long lines with beautiful dissonances. Primo Libro by James Weeks was the first piece to include the entire Ekmeles sextet, for premiered the work during their November tour. This composition features a 31-tone division of the octave. It was a striking performance showing the dynamic range and coalescence of the group. The presentation and emotions were also magnetic. Stuart Saunders Smith’s Light was a duo for mezzo-soprano and countertenor that exhibited a beautiful blend of timbres, exploring a wide range as well as impressive unisons. The final piece, Composition 255 by Anthony Braxton, incorporated the full group and showcased mind-bogglingly precise pitch-changes and featured the widest variety of healthy and expressive extended techniques, such as blurring the lines of spoken and sung text, manipulation of vibrato, and improvisation.

I had the pleasure to briefly get to know MACCM’s recent guests, both through their performance and during a lunch with them and a few composition and voice students. I found Ekmeles to be a group of down-to-earth and pleasant individuals, and it was especially compelling to hear their individual accounts of being singers during the Covid-19 pandemic. Tenor Tomás Cruz, for instance, shared his experience of being a cruise-ship singer living off the U.S. coast for the first few months of the country’s closures. With so few performance opportunities available to musicians, especially singers, it is encouraging to hear and witness the success stories of accomplished individuals. - Keri Lee Pierson, DMA Voice Student