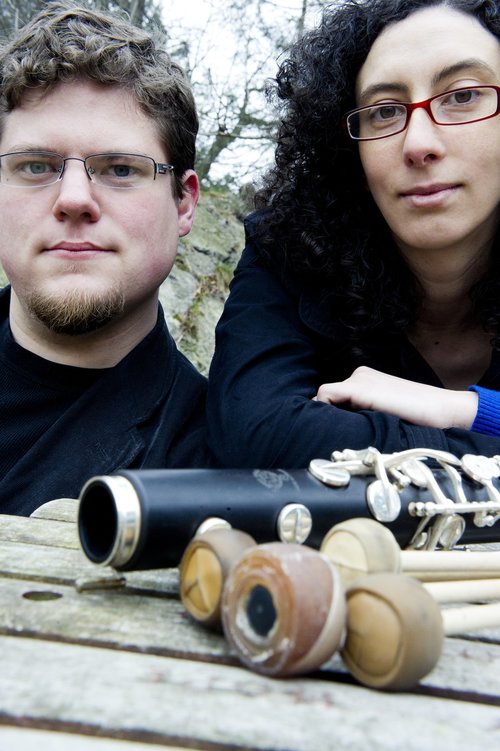 BOWLING GREEN, O. – Bass clarinet and marimba duo Transient Canvas will perform on Monday, November 20 at 8 p.m. at the Clazel Theatre (127 N. Main St.) in downtown Bowling Green as part of the Music at the Forefront concert series sponsored by the MidAmerican Center for Contemporary Music. The concert is free and open to the public.

Hailed as "superb" by the Boston Globe, and "nothing short of fabulous" by the Boston Musical Intelligencer, Transient Canvas (clarinetist Amy Advocat and percussionist Matt Sharrock) is elevating the roles of bass clarinet and marimba by commissioning new repertoire that expands the limits of their instruments and explores the seemingly limitless tapestry of color and character of their combination. TC has commissioned over 75 works by emerging and well-established composers from all over the United States, and has toured extensively in the U.S. and Europe. In August 2017, TC released their first album Sift on New Focus Recordings to rave reviews. KLANG New Music called it "one of the more refreshing things I've heard in recent years."

Equally dedicated to educating the next generation of performers and composers, Transient Canvas has presented masterclasses and composition workshops at James Madison, Rutgers, Northern Illinois, Franklin Pierce, Baldwin Wallace, Otterbein, Bowling Green, Kent State, and Kennesaw State Universities, the University of Maine, and the University of Wisconsin at Green Bay and Madison. They have also held residencies with the composition departments at Harvard, Northeastern, Brandeis, and Tufts Universities, the University of Georgia, the Vermont College of Fine Arts, the Boston Conservatory at Berklee, and the Alba Music Festival Composition Program.

Music at the Forefront is an annual concert series featuring performances by accomplished and innovative performers of contemporary music. For more information contact Kurt Doles at the MidAmerican Center for Contemporary Music (419/372-2685 – kdoles@bgsu.edu).