Karol Spencer models the power of one 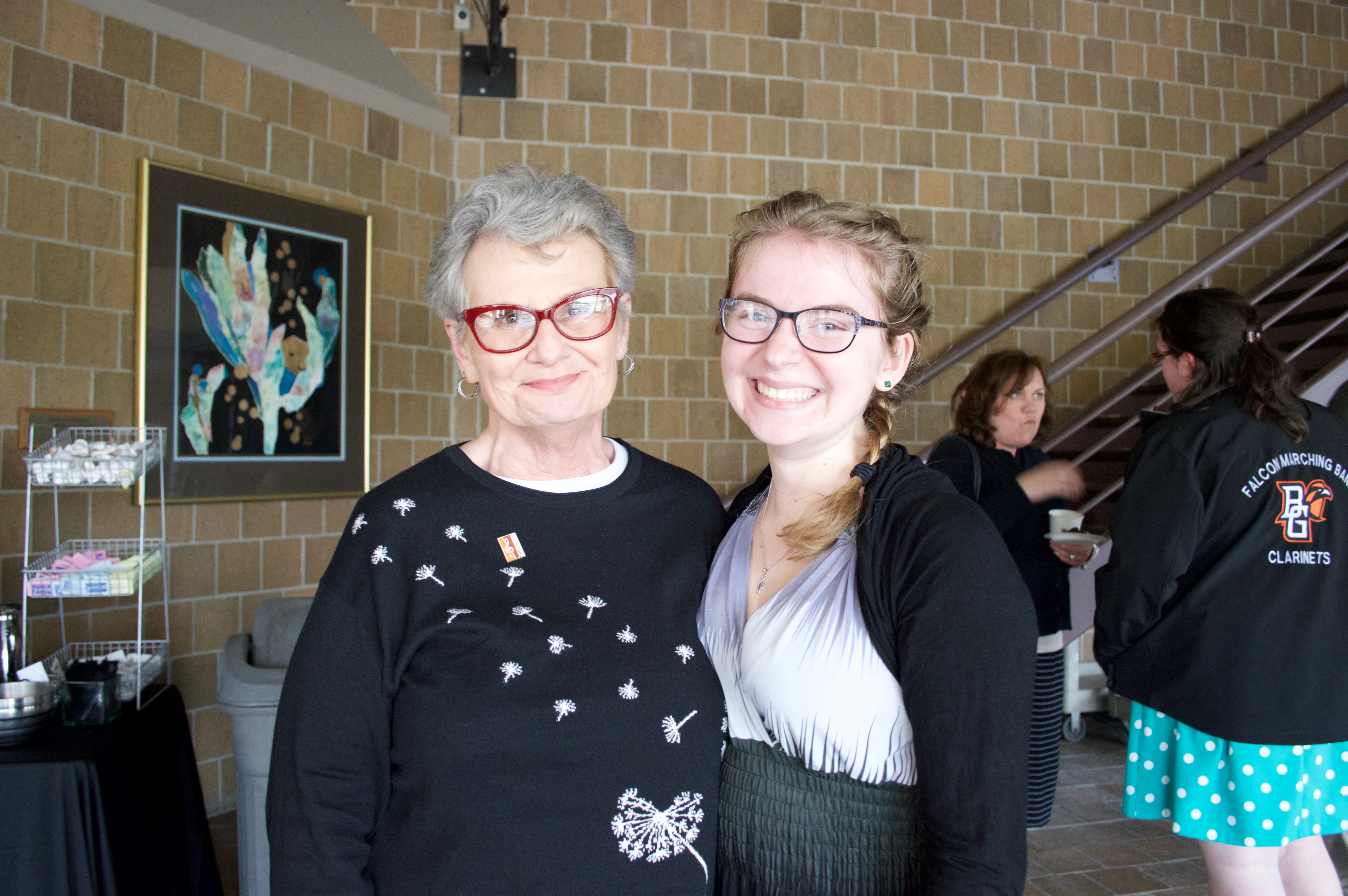 Ryan Nowlin has a vivid memory of his first encounter with Karol Spencer.

He and his fellow horn students were just leaving the Corner Grill in downtown Bowling Green after an early breakfast following a 3 a.m. practice session with their teacher, Dr. Herbert Spencer (a routine he instituted to help prepare for his annual music residencies in Belgium).

“Suddenly, Karol whipped around the corner in her sporty little car, going way too fast, and screeched to a stop right in the middle of the road in front of the restaurant. She jumped out and said she was so sorry she was late, but she wanted to meet the horn students. She had her dog, Simon, with her. I think that was Simon 2. They always have a dog named Simon.”

That anecdote is revelatory about not only Karol Spencer’s but also Herbert Spencer’s personalities. Passionate, unconventional, fun to be with and absolutely dedicated to one another and to students, the couple built a legacy of not only accomplished musicians but also of loyal support for students, BGSU’s College of Musical Arts and for the arts in general.

Nowlin, who is now a captain and assistant director of “The President’s Own” United States Marine Band, said he counts himself lucky every day to be part of Karol Spencer’s “chosen family.” “Lucky” seems to be the common feeling among those who have been fortunate enough to come into her wide embrace.

In gratitude for her many years of generous support for the College of Musical Arts and its students, she was presented the Dean’s Service Award at the college’s Honors and Awards event April 28.

As an elementary school teacher and then longtime school administrator, Karol Spencer was part of her husband’s students’ lives to some extent during his lifetime. But when he became ill in 1999 with the disease that had claimed many members of his family, a form of amyotrophic lateral sclerosis, she retired to care for him and at the same time became much more involved with the college. Nowlin, who had worked closely with his mentor, grew even closer to Karol as well, a relationship that has endured to this day.

“We were living this terrible thing together,” said Nowlin, whose own three children now call her Grandma Karol.

After her husband’s death in 2000, instead of stepping away, Karol Spencer became a strong presence both directly in the college and with Pro Musica, an organization that provides scholarships for students to have musical enrichment activities outside of school such as studying abroad and attending conferences. She has been a Pro Musica member for about 15 years, serving most of that time as president. She recently retired from the position to spend more time with her two grandsons and in her garden but continues her engagement with the music students.

“She turned her passion and dedication to education to supporting the college after Herb died,” said Dean William Mathis. “Under her leadership, Pro Musica thrived. She built the membership tremendously. And she gives students a sense of real support and real concern that goes way beyond even the scholarship they established, the Herb Spencer Horn Students Fund. She comes to events and gets to know them. She created the Spencer Emergency Fund for students who have sudden, unexpected needs — often international students — and they’re asked only to pay it back as they can.

“She also supports the annual Composer Reading Session with the Toledo Symphony Orchestra that brings the orchestra to campus to read and record student compositions. After a former supporter passed away, Karol stepped up to fully fund it that year. And she’s a member of Women in Philanthropy. She’s made a generous pledge to the college over the next five years. She just provides assistance with whatever is needed in the college.”

Mathis, like everyone else when speaking of Karol Spencer, noted her vivacious personality. “Her sense of enthusiasm and passion is just infectious,” he said.

Tina Bunce, former publicity and publications manager for the college, longtime member of Pro Musica and ex officio member of the group’s executive board, said of Spencer, “Where do you start? She’s one of the very, very special people. I feel blessed that she has been part of my journey. She’s the most positive, uplifting person I’ve ever met. She just overflows. She has the most contagious grin. She has such positive energy and life force, you can’t not get caught up in it.”

Bunce said that is probably how Spencer was so successful in building Pro Musica and support for the arts. “She’s so gracious and has such a kind heart. When she asks someone to consider doing something, she asks from her heart, and she always shows her appreciation. She also had the best way of reviewing events: She’d do ‘Cheers and Challenges.’ Her mindset is always ‘How do we get better?’”

This echoed Nowlin’s description of Spencer. “She’s a diplomat through and through. Even when she has bad news, she just says she needs to have a ‘quiet word’ with you.”

“Karol is a giving individual who never, never expects anything in return,” Bunce said.

The impact of her attention is felt in myriad forms. During the year of her husband’s illness, she worked with former CMA Dean Richard Kennell to make Moore Musical Arts Center as accessible as possible. “That was her first mission,” Nowlin remembers. “She channeled her energy into that.”

When Herbert had to go into a nursing home, she began bringing Simon the dog there every day to visit him, and that prompted her next mission, Nowlin said. She would also take Simon around to greet the other residents, a practice she kept up for several years after Herbert’s death.

“She donates herself to whoever needs her,” Nowlin said. “And education is such a passion for her.”

She continues to support students from her own days as an educator. When BGSU Police Capt. Tim James, a former student, earned his bachelor’s degree in criminal justice from the University last year, Spencer was there to celebrate his achievement.

“She’s a treasure to the University and is truly one of a kind,” Nowlin said.