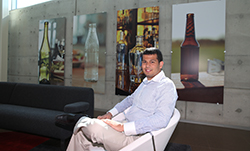 For graduating senior Pedro Petribu, no distance is ever too far to travel toward his dreams.

The Recife, Brazil, native has never been shy about seeking out success. Luckily for both him and BGSU, his personal success has gone hand in hand with that of the organizations with which he has become involved.

Coming to Bowling Green State University was not in his original plans. After attending two years of law school in Brazil, Petribu realized that he wanted to do something different in life. While he’d always loved law, being stuck in one place “freaked me out,” he said, so he began to look at other options.

“Business was always something I loved,” he said. “I did some research and discovered supply chain management.” After deciding to leave law school in order to pursue a business degree, he discovered BGSU and what he describes as one of the most noteworthy programs offered in his selected fields of accounting and finance.

Being an international student wasn’t always easy, but with the help of his Tau Kappa Epsilon (TKE) brothers, University faculty and College of Business Dean Raymond Braun, Petribu was able to overcome the many obstacles he faced.

One of those obstacles presented itself during freshman year when he attended the annual job and internship fair hosted by the Career Center, and came to an awful realization.

As Petribu’s involvement with the College of Business grew stronger, Braun quickly became one of his mentors.

“He’s incredible. He’s doing amazing things for the College,” Braun said. Petribu’s interest in and dedication to his programs of study gained him recognition. Eventually, he became a College of Business Student Ambassador, where he strived to share his experiences with fellow students.

“The ambassador job made me appreciate BG more,” he said. “It made me realize how much the College does for me.”

Despite his motivation to succeed, the initial decision to leave his family and friends in order to pursue his dreams was not an easy one.

“I love my country, but I would want to explore and go places,” he said, and Brazil didn’t offer the sort of educational experience he sought. Studying abroad was always something he was interested in pursuing, especially after participating in a 2007 exchange program his sophomore year of high school. During that time, Petribu learned English with his host family in Pennsylvania, which made the move to college in the U.S.  “the least painful transition,” he said.

Stepping back onto American soil instantly became a sort of homecoming. As an international student, Petribu, not unlike most freshmen, was looking for a place to call home and a family.

“That’s exactly what I got,” he explained, smiling. He found his particular family with his TKE brothers the second week of school. In fact, his connection was almost instantaneous because he became chaplain his freshman year. In this role, he was in charge of overseeing events, philanthropy, and academic coordination associated with the fraternity. His leadership roles only continued to grow with his education when he held the role of president for two consecutive terms. During those years, he was able to watch his brothers and the chapter prosper. “It was amazing to see it grow from a very new chapter created in 2011 into the biggest recruiting chapter on campus.”

Not long after arriving at BGSU, Petribu began making a name for himself throughout campus. Between the various organizations like TKE, Dance Marathon, Delta Sigma Phi and Order of Omega, he quickly became a prominent member of the student body. While his experiences with each individual organization hold a special place in his heart, he feels his greatest success rests with his Greek life brothers.

Under his leadership, TKE was named Top TKE Chapter two consecutive years at the national level. In addition, Petribu won the President of the Year Award and Greek Man of the Year Award in 2013-14. With such success, TKE members found themselves relying more on his leadership. Inevitably, when Petribu announced his plans to study in Hong Kong, the chapter became worried.

“They were concerned the chapter was only successful because of me. No, it was our success as a chapter, our willingness to work together, and our different personalities that created TKE’s success,” Petribu argued. While he was studying in Hong Kong this past fall semester, his observation proved correct.

“The chapter is even better – as it should be. I left a legacy, but that’s just what it is. I knew I was leaving the chapter in good hands even when they didn’t believe in themselves. “ 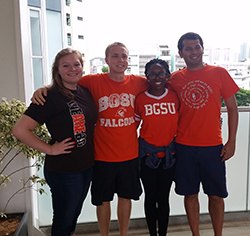 While TKE continued its life in Bowling Green, Petribu had the opportunity to experience what he referred to as “one of the financial centers of the world.” His semester in Hong Kong was spent with four other BGSU College of Business students and newfound friends from all over the world. Together, they not only learned about the financial industry, but they also explored other countries such as China, Singapore, South Korea and Australia.

Petribu spoke highly of his study abroad experience in Hong Kong. “Everyone there isn’t at home. They come to Hong Kong because everyone is trying to gain experience and to network,” he explained.

Once he returned to BGSU, he found that his wish for TKE had come true. “My brothers were forced to realize the chapter was great without me.” His time abroad was a learning experience not only for him, but his brothers back in BGSU, continuing the TKE tradition.

As he reflects upon his time at BGSU and the opportunities that led him to graduating this spring, he said, “It’s weird to think of myself as anything other than a Falcon. I can’t picture myself graduating from any other university.”

With a job in Toledo already lined up after graduation, he won’t be far from his brothers and the small town of Bowling Green that he now calls home.