Students “Hatch” a Deal with Investors to Launch Startups 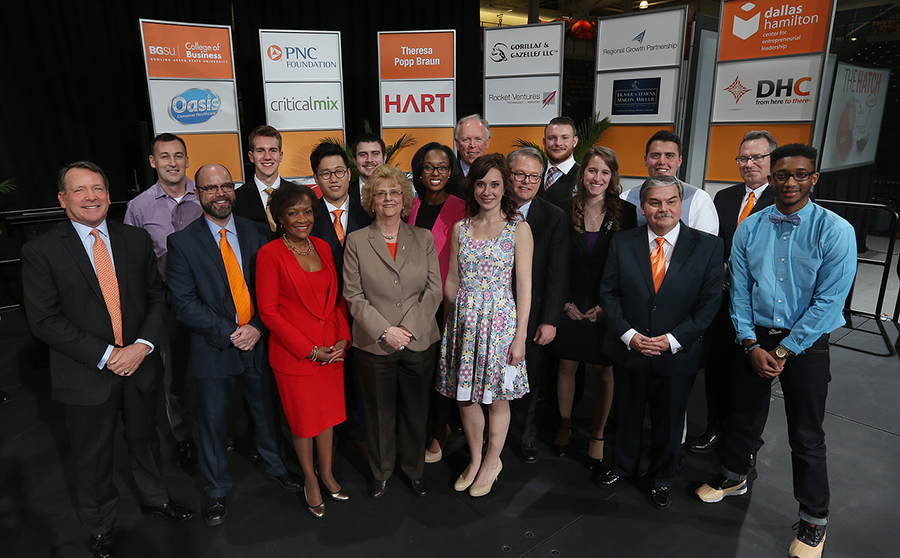 The Stroh Center was packed with 3,500 cheering fans anxious to see which of the nine student entrepreneurs would convince Falcon Alumni Investors to fund their business ideas at The Hatch™.   After presenting their business ideas “Shark Tank-” style, two of the Hatchlings were successful in obtaining investments and four others received investor support to “hatch” their proposed business venture. 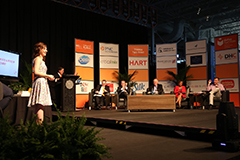 Elsa Vogel proposed “Pieces of Me” - a company with a web-based program to create personalized clothing patterns based on personality traits. The pattern can then be applied to a variety of wearable merchandise. All five Falcon Alumni Investors want to partner with Vogel and will re-evaluate her proposition which could result in more funding than her $40,000 ask in exchange for a 20% equity. She also received the people’s choice award through text voting which earned her the event’s “Eggy” award. Her alumni mentor through The Hatch™ process was Paul Hooker ‘75, former owner of SFERRA, a luxury household linen company. 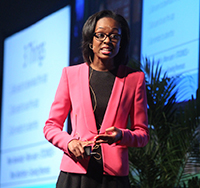 Another female entrepreneur, Devon Williams, wants to launch MuSync, a music synchronization phone application that allows several users to listen to the same music in real time without having to share headphones or ear pieces. Once again, all five Falcon Alumni Investors agreed to partner with her with a $40,000 investment in exchange for a 20% equity. Aggie Haslup ’74, ‘88, a technology and software marketing executive with extensive experience in developing and executing corporate, product marketing, and product management strategies, was Williams’ alumni mentor.

Four other Hatchlings received investor support based on further discussion with investors, a reshaping of their deals, and more “due diligence.” Allen Viancourt asked for $40,000 for a 40% equity in “Turf Tech” digital fields which allows coaches to outline plays, formations and drills using 3D projections. Viancourt’s alumni mentor was David Bruhowzki ‘97, a client advisor at Deutsche Bank Securities Inc. in New York. 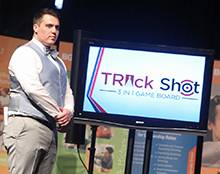 Hatchling Matt Snider asked for $70,000 to create a three-in-one tailgate game table for corn hole, ladder ball, and beer pong called “TRIckShot.” Four of the investors were interested in investing but want Snider to get the provisional patent and sell TRIckShot at upcoming tailgate events to prove the concept. Bruce Fisher ‘68 served as Snider’s alumni mentor  and was a top executive with Hayward Pool Products Division of Hayward Industries before retiring.

Meredith Keller’s emotional entrepreneurial journey took her in a different direction than pitching a product.  Her idea was to create an app that can track the calorie intake of someone with cystic fibrosis (CF) in order to facilitate proper nutrition and growth and communicate this information to the doctor. Her two young nieces struggle with CF and she wanted to create a product to help them. What Keller found over the past few months was that the University of Cincinnati Children’s Hospital is already developing the app, so Keller instead asked the investors and the audience to donate to the Christina Davidson Foundation, whose struggles with the disease recently went viral in a YouTube video, attracting 13 million views.  Davidson was on stage during The Hatch™ to thank Keller for her efforts. Nico Cottone ’92 was Keller’s mentor.  He owns and is CEO of SurfTech Inc. and Euclid Refinishing Company.

Michael Cervantes pitched a hibachi food truck business, called “Machi Hibachi,” to be operated in downtown Columbus. His mentor was Ed Leedom ‘89 who has over 20 years of experience in the finance industry.  “U-Beequity” was the business idea developed by Mark Kohn to market honey and other bee-related products and promote the practice of beekeeping. Serving as his mentor was Al Caperna ‘76, who has founded and owned numerous companies, including co-owning CMC Group. 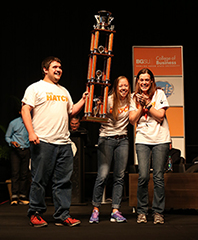 The event kicked off with BGSU 2014 graduate Mikey “Rosco” Blair warming up the crowd with his viral YouTube video - the “Stroh Center Rap” – and he introduced the four high school finalist music videos that promoted entrepreneurship. McComb High School was the winner of the contest through text voting by The Hatch™ attendees. 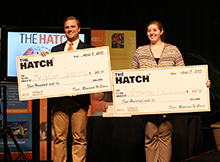 An additional contest this year was to reward BGSU organizations which could bring the most members to The Hatch™.  Alpha Omicron Pi and Sigma Lambda Beta won for the fraternity and sorority category and Delta Sigma Pi won for best non-Greek student organization. The winning organizations each earned $500 for their favorite charities.  Receiving the monetary awards were the Alzheimer’s Association, RallyCap Sports, and the American Cancer Society.

Besides students, alumni, and the University and business communities attending The Hatch™, nearly 500 high school students and their business teachers cheered on the aspiring entrepreneurs as part of the newly-designed high school entrepreneurial curriculum developed by the Dallas-Hamilton Center for Entrepreneurial Leadership.

This is the third year for the highly successful business incubation event which is hosted by the Dallas-Hamilton Center.