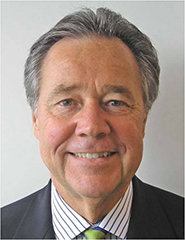 Ken Petrilla’s renowned international banking experience has led to California Governor Jerry Brown selecting him to lead his state’s business development efforts with China.  Petrilla was recently named the executive director of the California-China Office of Trade and Investment, an agency Governor Brown created in conjunction with the Bay Area Council in 2013 to serve as a central office for California companies interested in entering or expanding in China as well as promoting and facilitating Chinese investment into California.  According to a statement, the governor’s senior jobs advisor says Petrilla is “one of the most experienced international banking executives in California.”

The 1968 graduate of BGSU most recently was the head of Wells Fargo’s China desk and previously served in a variety of senior executive positions for the San Francisco bank, including regional head of Europe, the Middle East, and Africa. He brings more than three decades of business and financial experience to his new position in Shanghai.

According to Petrilla, China-related activity is exploding globally and he plans on attracting that country’s investment pool to California.  “I am interested in promoting California and facilitating business in a variety of businesses, including high-tech, bio-tech, manufacturing, agriculture, commercial and residential real estate and entertainment, but the greatest opportunity is in clean or green technology.  China wants to clean up its cities and provinces and California has the technology and experience to help.  In fact, California is well-positioned to be the global center for clean technology.”

Petrilla states that foreign investment in California is a win-win for all of the U.S. and not just the West Coast state. “China's growth and investment in California is important to the rest of the United States because China's growth does not come at the expense of other states.  China-related activity in California or any other state is good for the U.S. as a whole because direct investment and related activities will generate more activity in the U.S.; more goods and services will be sold; barriers and stereotypes will be broken, and thus all of the U.S. benefits.”

Petrilla’s roots are in Warren, Ohio, then in Bowling Green, both vastly different economic environments from California and China.  But he credits his time at Bowling Green State University for sparking his passion for international business. “Bowling Green, while not New York City, exposed me to a variety of people and ideas.  My time at BGSU instilled in me a thirst for knowledge, diversity and a desire to explore the world.”