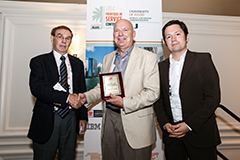 Internationally renowned and recognized as an Outstanding Marketing Teacher by the Academy of Marketing Science and Master Teacher by the Marketing Management Association, Dr. Dwayne Gremler, a Fulbright Scholar, has added another prestigious award to his list of honors. Dr. Gremler, Professor of Marketing, was presented the 2014 Christopher Lovelock Career Contributions Award given annually by the American Marketing Association’s Services Marketing Special Interest Group (SERVSIG).  According to SERVSIG, this international award is given to “the individual whose teaching, research, and service have had the greatest long-term impact on the development of the services discipline.” This is the highest award presented in the field of services marketing. 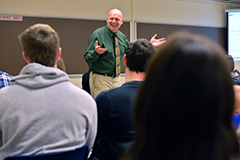 An example of Dr. Gremler’s impact in the services marketing field is evident by an article he co-authored which identified him as one of the most influential scholars in the past 40 years. His article, “Relational Benefits in Services Industries: The Customer’s Perspective,” is the 7th most cited article in the 40-year history of the Journal of the Academy of Marketing Science. A 2012 study identified those articles in that journal that have received the most citations, ranging from 800 to 4,500, and suggested that the list of authors/co-authors signify “today’s thought leaders in marketing.”

Dr. Gremler also shares his internationally-renowned expertise with his students outside of class as he coached a team of BGSU marketing students to the championship title at the inaugural 2014 National Service Marketing Competition.