Recent graduate Chelsea Folk was honored with one of the most prestigious awards from APICS which is the leading professional association for supply chain and operations management in the world. Folk was presented the Student Voluntary Service Award given annually to one student who demonstrates outstanding leadership and a commitment to volunteering to the local chapter and community. 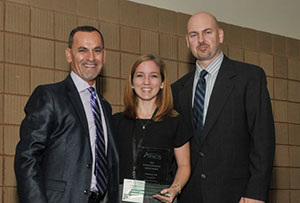 Folk was presented the award at the APICS International Conference & Expo by APICS CEO Abe Eshkenazi (left) and Chairman of the Board Jason Wheeler at the APICS Conference.

Folk’s accomplishments include her successful role in the BGSU College of Business student organization Supply Chain Management Association (SCMA) as the director of fundraising and later as president, leading the organization to its fifth consecutive year of platinum status.  Beyond her role within SCMA, Folk participated in several case competitions and earned a Professional Development Certificate from the BGSU Supply Chain Management Institute. The 2014 graduate also participated in two internships before graduation which helped her obtain a full-time position as a buyer at Honda North America Inc. in August.

This is not the first time a BGSU student has been chosen for this prestigious student honor.  Beth Albers was chosen in 2013 and Amanda Braddock in 2009.  In addition to students being honored, Dr. Janet Hartley, a supply chain management professor, was recently presented with the APICS Student Chapter Mentor Award.