The BGSU Sales Competition showcases our best and brightest students pursuing a career in professional selling. It has a long tradition of excellence and prestige associated with it and sponsoring companies come to the University to meet these students and recruit them for their companies.

Seiler is excited about the students chosen as finalists. “Once again we have a very strong and diverse group of sales-minded students participating in the BGSU Sales Competition this year. I think it is wonderful that students begin taking advantage of these professional development opportunities as early as their freshman and sophomore years. What a great way to stand out from other students in the job arena. I can't wait to see them in action!”

The role plays for the BGSU Sales Competition were recorded on October 17 and videos sent to representatives of sponsoring companies for judging. The winners will be announced on November 12 at the Marketing Department’s Sales Awards Banquet. 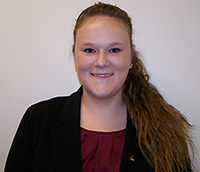 After a highly competitive event against top students, Jessica Miller placed fifth overall. She had to sell ADP payroll services to a salsa production/manufacturing company. Miller made it to the final round by being the top scorer in her pool during the first round of role-plays.

Upcoming is the Great Northwoods Sales Competition at the University of Wisconsin Eau-Claire with Ashley Holzwart, Andrew Kahl, and Jane Swartz representing BGSU.