Athletic teams are often defined by their ability to come together to achieve a goal. The “rally cap” has become a symbol used in a variety of sports to encapsulate that powerful camaraderie. Teammates, coaches and fans join together in turning their hats inside out to spark a come-from-behind victory. A non-profit organization called RallyCap Sports, founded in New Jersey, is using this unique symbol to represent its goal of helping people with disabilities participate in sports in order to bring a community together and foster an environment of “together we rally.” 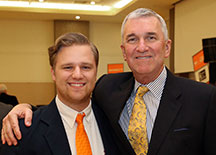 This passionate spirit to help people with disabilities is coming to Bowling Green through a collaborative effort between BGSU alum Paul Hooker ’75, founder of the non-profit, and senior business student Luke Sims.  The two are launching a RallyCap Sports program here on campus, starting with a kickoff on Sunday, October 19 at the BGSU Perry Field House. 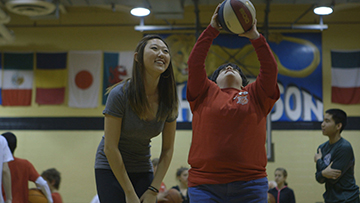 RallyCap Sports is a recreational sports program that provides people with disabilities an opportunity to participate in sports, such as soccer, basketball, golf, and flag football. Each participant is paired up with a volunteer “buddy” for one-on-one interaction that fosters an environment for positive reinforcement and inclusion.

Hooker came up with the idea of this non-profit as he was coaching a Little League team in 1990.  He asked a young girl in a wheelchair how she was doing as she watched her brother's game. Her two-word answer -“This stinks” - resonated with Hooker. Soon after, he and his wife, Margo, started the Challenger Little League program in Middletown. They now also run Challenger soccer, basketball, and tennis programs, with children participating from 20 towns. Originally founded as Challenged Youth Sports, the name has taken on a revamped focus and has been changed to RallyCap Sports. The new name symbolizes the vision of this organization to see a community “rally together.”

The idea to expand RallyCap Sports outside of New Jersey came after Hooker sold his highly successful linen company SFERRA.  He discussed growing his non-profit venture with College of Business Dean Ray Braun last spring. The dean saw a valuable opportunity for a student to launch the non-profit here at BGSU and approached student Luke Sims about teaming up with Hooker. 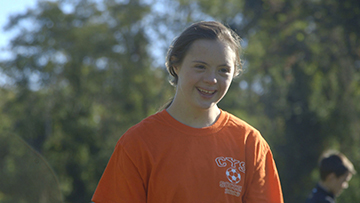 Sims differentiates RallyCap Sports from Special Olympics.  He says that it is “less about achieving sports accolades and more about getting to have fun and be included. It is a recreational league where participants have one-on-one interaction with a volunteer and connect with others.”

“I saw this as a great opportunity to bring a community together for one common goal.  It seemed to pair well with some of the logistics as BGSU has a vibrant volunteer population as well as highly accessible facilities,” states Sims, who worked as an intern for Hooker’s organization over the summer. He also met weekly with Dean Braun and director of the Dallas-Hamilton Center for Entrepreneurial Leadership, Kirk Kern, to develop a proposal to bring RallyCap Sports to BGSU.  According to Sims, “After working on this project, I have become so passionate about helping people with disabilities.” Sims adds, “Our society is so consumed with creating for-profit businesses, but there is room for social entrepreneurship too. I have developed a passion for this population, and it has been great to work with Paul, the dean, professors, and coaches on making this organization a success at BGSU. Our hope is to create a thriving organization that we will be able to help duplicate at universities across the nation.”

The kickoff on October 19 is a free event for the entire community, including not only the participants, but their families, students, BGSU student-athletes, faculty, staff, coaches, community members, and University administrators. This will be a time of community building, fun, and a chance to come together as a community.

Sims states that after the kickoff there will be a four-week session where participants will not only get to play soccer, but they will meet the BGSU soccer team, enjoy watching one of the team’s matches, and play “under the lights” at Mickey Cochrane Soccer Stadium. In the spring, the BGSU RallyCap Sports program will feature a new sport, along with unique and fun activities for everyone involved.

Many from the BGSU community are coming together to launch this program. Sims has had an overwhelming response from people wanting to volunteer for the BGSU program. "This is a great way to connect to the community doing something bigger than yourself.” One example is BGSU Director of Athletics, Chris Kingston, has offered his support to RallyCap Sports by aiding in sports facility use and behind-the-scenes tours.

Besides volunteering, individuals and companies can get involved with RallyCap Sports by subsidizing participant costs so they remain reasonable. Each participant is charged a fee to participate in the rec league sessions.

The senior business student, who is specializing in marketing and entrepreneurship, admits that before being approached about this opportunity, he wasn’t sure what direction his career would take. But Hooker gave him “a great opportunity to be passionate about something that truly makes a difference in the lives of people with disabilities. It has been life changing for me.”

Sims is taking a non-traditional path to entrepreneurship by not starting up a for-profit business, so the return on investment for him is the rewarding feeling of “doing something good for a population that gets overlooked in our society.”