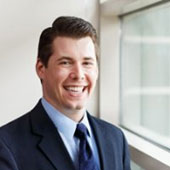 Leo Svoboda, a 2008 BGSU graduate with a degree in economics/financial economics, is one of six winners of the 2014 Investor Intelligence Awards recognizing the most outstanding and innovative Corporate Plan Sponsors in North America. Nominations were submitted by nearly 800 asset allocators and additional feedback was solicited from nearly 600 asset managers. Categories include: Rising Star award; Investor Intelligence award in Defined Contribution; Delivering Retirement Security; Alpha Generation; and Liability Matching.

Following the February voting, the six inaugural award winners were announced at an awards dinner in March in Washington, D.C.  Svoboda was one of five nominees for the Alpha Generation category, including another BGSU finance alum Neil Roache ‘96, Managing Director, Public Markets and Investment Strategy, Exelon Corporation.

Poised to attend law school, Svoboda’s plans changed when he was selected as an intern by Neil Roache, Portfolio Manager for Fixed Income and Absolute Return. Svoboda became a full-time analyst for Absolute Return, focusing on building out the Trust’s direct program. As Portfolio Manager for the UPS Group Trust in Atlanta, Georgia, he oversees the $4 billion liquid alterna­tives portfolio.

In addition to the Investor Intelligence Award, Svoboda was chosen as one of aiCIO magazine’s “Forty Under Forty” in 2014. According to Asset International Chief Investment Officer’s magazine, “By being only 28 and running a portfolio of $4 billion in liquid alternatives for UPS–all while pursuing an MBA from Wharton–Svoboda measures up well to his peers, both in this year's Forty Under Forty as well as the highly-respected UPS fund.”

Besides his investment responsibilities, Svoboda also is “giving back” to his alma mater as a member of the Dean’s Young Alumni Board at BGSU’s College of Business.