As we get set for the big rivalry game between the BGSU Falcons and the University of Toledo Rockets on Saturday, October 26, Teddy Piepkow, a 2006 graduate from the College of Business and a former captain of the football team, reminisces about the battle of I-75. Teddy, who is now the Distribution Sales Manager for TPC Wire & Cable, shares his football memories from his senior year.

To be a part of a rivalry game is something that very few people ever get to experience—one as rich as The Battle for the Peacepipe & I-75 has the power to take hold of an entire University, community and, in some situations, an entire state. Rivalry week begins immediately after the week’s previous game and the atmosphere on campus, practice and the community revs up with a rejuvenated focus and devotion to a single purpose—BEAT THE TEAM UP NORTH. Previous players stop in at practice more this week than any other; community leaders, University Presidents, and our always rowdy student body show their support by wishing us good luck on campus or in class. The three previous games in the Battle for I-75 had a direct result on who would go on to play in the MAC Championship game. All games were filled with players that would go on to excel in the NFL, hard hits, lots of points and one group of seniors elated with the result of finishing out a season and career exactly as they had imagined, and the other dejected left to live a lifetime of wondering what they could have done differently to alter the outcome of the game.

I remember The Walk from the bus into the Doyt, looking into the eyes of my teammates, fans and family that had been so supportive during a career that resulted in unprecedented success for this program. The atmosphere was electric, cars were backed up for what seemed like miles on I-75, and we were ready. Five minutes before kickoff both teams cleared the field. This night was special for a number of reasons---it was our last regular season game, and it was the seniors' last game at home—Senior Night. When we came into the locker room we were all surprised to see brand new uniforms - we would be the first team in over a decade to wear the BGSU brown jersey! In five minutes we would take the field for the last time in Doyt Perry Stadium, and greet our parents and loved ones with hugs, looks of confidence to take on the task at hand, and even a few tears realizing that this moment was finally upon us.

Freshman camp seemed like an eternity ago, all the ups and downs of being a student-athlete at BGSU were running through my head: the Friday morning lifts, two-a-days, beating Purdue, winning two Bowl Games, College Gameday coming to BGSU, trudging through the snow at 5:00 AM for winter conditioning in the indoor, summer workouts on field four, sitting on that wall in the back of the weight room for what seemed like an eternity…all leading to this moment, and we were ready. 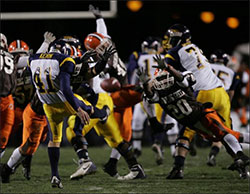 The game started out exactly as the three previous games against the team up north had—momentum was on our side and we got up early; I even blocked a punt in the 1st quarter that led to our 7-0 lead. We battled back and forth through the next three quarters and ended regulation in a tie at 31-31. Both teams scored a touchdown in what was the first Overtime—and we were held to a field goal to start out the 2nd OT period. UT was coming into our south end zone with the season, a conference championship, a Bowl Game and the class of 2005’s legacy in the balance. Hold them scoreless and we win, a field goal to give the ball back to our offense, a touchdown and our career at BGSU is over. UT’s quarterback Bruce Gradkowski rolled out as he often did that season and I read the play well—forcing him to rush his throw and putting him on his back while the ball sailed out of bounds. It was 3rd & 10 and the Rockets ran a play action pass—Gradkowski rolled to my left, set up to throw to a delay across his body into the arms of his waiting tight end in the end zone. Game over, season over, career over, and that was the last time I ever put on a helmet.

During Rivalry Week, please seek out the members of the BGSU football team while walking the halls of the BA building, or walking on campus and tell them to BEAT THE TEAM UP NORTH. We need all of you to get to the game on Saturday to cheer the Falcons on to victory. Keep a look out for a group of 40 football players in the north end zone as we will be on campus showing our support for this year's team.