MAcc Attacks Cancer by Participating in Relay for Life 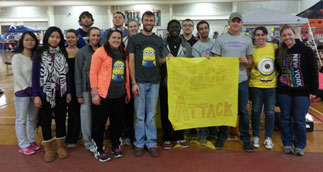 Students in the Master of Accountancy (MAcc) program teamed up to work on a significant project that did not relate to their academics but rather to help reach the worthy goal of "attacking" cancer and wiping it out by finding a cure. More than half of the enrolled graduate students in the MAcc program joined together and formed a large team that participated in the local American Cancer Society’s Relay for Life held at BGSU’s Perry Field House. They took turns walking a total of 12 hours around the indoor track throughout the night of November 15.

These motivated students raised $1471 in a variety of fundraising activities. For example, one student donated winnings from a night at the casino. One challenge many of the team members participated in was filling an empty water bottle with dimes obtained from friends and family. (One full water bottle equates to $100). The Dean of the College of Business Raymond Braun challenged Team "MAcc Attack" to raise at least $250 and recruit half of the MAcc cohort to participate in the Relay and he would donate $250. Since the team exceeded its goal by more than $1,000, the Dean increased his donation to $400.

Three captains of Team "MAcc Attack" were Chelsea Soss, Steve Kalinic and Tyler Johnson. For Chelsea, this is not her first time participating in the Relay for Life, but her fifth year. She says she participates because she knows she can "make a difference in the fight to end cancer." Chelsea and her teammates are highly motivated in their efforts to raise money for a cancer cure. She adds, "Together, we have the power to help create a world where cancer can no longer claim another year of anyone’s life."

The team attributes its fundraising efforts to the kind donations of a lot of the faculty and staff at BGSU. Most of the accounting professors donated to their team, which helped boost their final numbers. Out of 41 local teams participating in Relay for Life, the accounting student team placed fourth in terms of fundraising for the cause. They also had the second largest team at the event with 23 members.