From Military Service in Iraq Back to Student and Entrepreneur 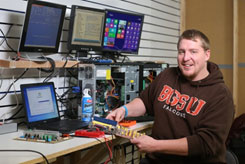 Working long hours and managing many different projects is nothing new for Shawn Herman. Herman served in the Navy for six years before resuming his academic career at Bowling Green State University. He’s using those time management skills to not only finish his degree in Management Information Systems, but also to run a new electronics repair and retail outlet in Bowling Green called Inspect UR Gadget.

Herman first came to BGSU in 2004 after graduating high school, but left after just one semester. He went on to start a successful business in the Toledo area called Allied PC, but eventually decided the long-term prospects were not good. His dad suggested joining the military and taking advantage of the G.I. Bill that would follow.

He joined the Navy and did five tours in the Persian Gulf with barely any down time in between. Herman says it’s more than many people do in their entire military career.

"We were the last carrier to leave the area when we withdrew from Iraq officially and we did other missions in the Middle East and the Gulf," he said. "I decided after that it was time to move on. I got burned out on deployments."

The 28-year-old left the military in February and immediately contacted BGSU to enroll. He was also able to transfer the credits from classes he took while deployed, which gave him junior status.

A project in a business class over the summer semester paired him with fellow student Lucas Smith, a marketing major. The class was asked to create a temporary weekend business and turn $5 into $150. Herman suggested $20 computer repairs and says they easily turned that $5 into almost $200.

"I’d been wanting to get into business again. I’ve learned so much since my last time out and I’ve always wanted another shot at it. One day I was at the Pita Pit and saw the landlord put a for rent sign up next door and I realized that would never happen again."

Along with Smith and another business partner, Herman opened Inspect UR Gadget.

"We’ll be fixing cell phones, tablets, laptops, computers, video game systems, pretty much anything with electricity through it. I’ll have discounted services to students, and I’m working to accept the BG1 card. We’ll be Falcon friendly— my motto is for students, by students. I also want to give the community of Bowling Green a chance to get things looked at without having to pay a huge charge. We’ll be selling and buying electronics as well."

Inspect UR Gadget is open daily from 10 a.m. to 8 p.m. in the shopping plaza at the corner of Wooster and Thurstin Streets. Herman is already starting to think long term.

"Our bigger vision is to bring an Inspect UR Gadget to the majority of campuses in the area."